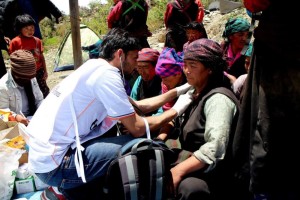 A doctor from MSF tends some wounded Nepalese.

Irish aid agencies have appealed to the public for funding for Nepal following a second major earthquake on Tuesday.

“Our efforts to get aid to 175,000 people affected by the recent earthquake in Nepal were interrupted by a second massive earthquake,” wrote Trócaire’s humanitarian coordinator in Kathmandu, Conor O’Loughlin.

He described how the agency’s entire building in Kathmandu shook violently when the quake measuring 7.3 on the Richter scale hit.

“Myself and my colleagues ran for the exit and moved to open ground. Several buildings around us were badly damaged. A health clinic completely collapsed but thankfully there was nobody inside,” he said.

The second major earthquake was “a terrifying reminder of how vulnerable people in Nepal are”.

With over 170,000 buildings badly damaged from the first earthquake, there is a real fear that any further aftershocks or tremors could see them collapse.

A team from Medecins Sans Frontiers (MSF) that was assessing the needs of the people in the remote Dolakha district witnessed at first-hand the destruction of the villages by the second earthquake and landslides.

Dolakha district was the epicentre of the latest 7.3 magnitude earthquake, the second one to strike Nepal in two weeks.

“In Charikot, a village at the edge of the mountain, buildings had collapsed,” MSF reports.

“The village of Sailungeshwar was affected by many landslides, some of which were ongoing at the time of the assessment.”

The agency says it will continue evaluating the needs in the affected areas while providing medical and relief assistance to the populations in need.

“This complicates an already precarious situation. There is going to be more trouble accessing the affected areas,” said Dan Sermand, MSF’s country director in Nepal.

Currently MSF has 120 staff on the ground in Nepal who have been providing medical assistance for the last two weeks and distributing food and shelter to remote areas impacted by the previous earthquake.

The agency has also set-up a 20-bed inflatable hospital in Arughat in Gorkha district, which is running and serving the population affected by the previous disaster.

Ros O’Sullivan, Concern Humanitarian Advisor, has been in Nepal with Concern’s emergency response team for the last two weeks.

He wrote that there had been “five big earthquakes and several aftershocks in the last few hours. We can see dust rising from houses as they are collapsing.” He said the quakes were “devastating for the people of Nepal”.

“Families have just started to feel safe going back indoors at night.” They had experienced a serious trauma and the latest quake had made everyone “extremely nervous”.

Mr O’Sullivan said the latest earthquake would undoubtedly result in the need for “additional shelter resources, as well as clean water and hygiene kits.”

Concern, Goal, Trócaire and Medecins Sans Frontieres are all running Nepal appeals.  Members of the public may donate through their websites.