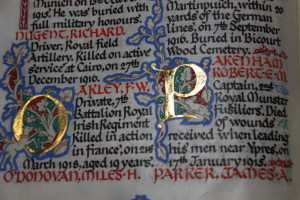 On the centenary of the commencement of World War I, St Fin Barre’s Cathedral in Cork city launched a new project which will commemorate veterans and the fallen of the Great War.

Announcing the commemorative project, Bishop Paul Colton of Cork, Cloyne and Ross appealed to the public to send scanned photos of their relatives who were among the First World War’s fallen and veterans for the memorial.

“We want to create a visual memorial through old photographs and put faces on the human cost of war, on the names etched in stone, memories and hearts,” Bishop Paul Colton explained.

This televisual memorial will be located within St Fin Barre’s at the War Memorial which is known as ‘The Heroes’ Column’.

According to Bishop Colton, the aim is to remember “as many of the casualties of war as we can and inspire people to work for peace, reconciliation and justice in our world today.”

The Bishop said he and Dean Nigel Dunne, who is also involved in the project, are hoping that photos of people connected with Cork in the past, or connected with Cork today through immigration, will be sent so that all sides in the conflict are represented.

“We’re going to include photos sent in by people who are currently living in Cork of their relatives, wherever they came from. We are hoping that some of the many immigrants to Ireland: Germans, Lithuanians and Estonians, will also send in photos of their relatives to be remembered.” 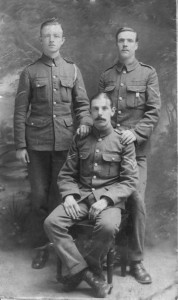 Bishop Colton’s grandfather, Samuel Colton from Dublin, aged just 18, who served in East Africa with the British Army’s Ordinance Corps in World War I, pictured in September 1914 while he was on leave.

Among the photos that will be part of the televisual display are two images from Bishop Colton’s own family archives.

One shows his grandfather Samuel Colton from Dublin, aged just 18, who served in East Africa with the British Army’s Ordinance Corps in World War I. He survived the war but bore the scars in his feet for the rest of his life.

The other image shows his grandmother Ciss Marsh with her first husband Daniel Griffith from Dublin who served with the Royal Inniskillings and fought at the battles of the Somme, Ypres and Messines before he was killed in Cambrai on the 20 November 1917.

Those who can scan family photos are asked to email them to the project. However, those who don’t have the technology can turn up at the cathedral on 8 November as dedicated scanning stations will be there to help them.

On 9 November, Bishop Colton will preside at a requiem in the cathedral at which all the names of those in the scanned photos will be remembered.

Further details can be obtained by emailing: [email protected]