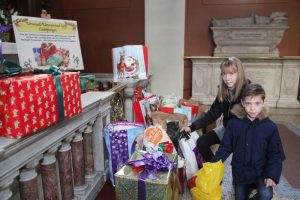 Children drop off some extra presents at Pro Cathedral in Dublin. (pic by John McElroy)

Did you get two fitness watches for Christmas or three pairs of socks or four perfume sets? Have you simply more than you need?  The Dublin  cathedral parish of the Pro Cathedral in Marlborough Street, offers you a home for those gifts which may be surplus to you but may make someone else very happy.

Following a yearly tradition, from Tuesday this week, the staff at St. Mary’s Pro Cathedral in the city centre have been accepting donations of unwanted Christmas gifts from the public.

The  gifts collected from St Stephen’s Day until the end of the week, will be passed on to Crosscare, the Social Support Agency of the Catholic Archdiocese of Dublin, which will redistribute them this time next year to people living in their homeless services.

Crosscare homeless services range from emergency accommodation to short-term housing to medium and long term support services. During 2016, the agency provided accommodation to 2,024 people and 125 families in six residences for people experiencing homelessness in the city centre, and Dun Laoghaire. Earlier this year, Crosscare opened a new family hub facility in Drumondra. The building was made available by the Archdiocese of Dublin to Dublin City Council to help alleviate the problem of families living in hotel accommodation.

On Christmas Day, hundreds of people living at their seven homeless and emergency accommodation hostels in Dublin and Dun Laoghaire received gifts donated to the Pro Cathedral after Christmas Day last year. 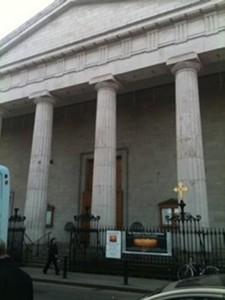 The Pro Cathedral staff in Marlborough Street and Crosscare staff based in Clonliffe, will spend all this week collecting any unwanted gifts left at the cathedral which will be put in storage for the next 12 months for distribution in their homeless services this time next year

In addition to homeless services, the care agency runs a Youth Residential Service, Echlin House, in South Circular Road which provides short to medium term residential care for young males between the ages of 12 and 18 years of age, who are experiencing homelessness.

The agency also runs a Housing and Welfare Information service, a Migrant Project and a Refugee Service which provide direct information and advocacy services in the areas of housing, homelessness, social welfare, immigration issues. In addition, it provides an aftercare non-residential service for young people who have lived in care. Other services include a youth service, and food banks in six locations around the capital, which redistributes hundreds of tonnes of surplus or end of line food products to charities and registered not for profit organisations.

At the beginning of December, Archbishop Diarmuid Martin launched a parish food appeal. According to Crosscare Manager Michael Mc Donagh, people were “particularly generous this Christmas,” with “thousands of food items donated in just one weekend”. By the end of the week leading up to Christmas, he said, they had distributed 10,000 food hampers to  families in need of help.

The ‘unwanted gifts’ appeal continues to the end of this week.