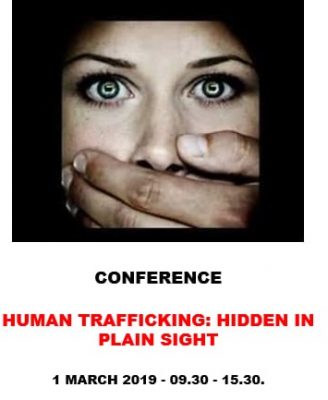 Kevin Hyland, OBE and former UK Anti-Slavery Commissioner, is keynote speaker at an anti-human trafficking conference in Dublin next week.

The Act to Prevent Trafficking (APT) group organising the conference is honoured to welcome guest speaker Kevin Hyland as an Irishman and someone who was instrumental in setting up the *Santa Marta group, and one of the world’s leading voices in the fight against human trafficking.

He was appointed Officer of the Order of the British Empire (OBE) in 2015, acknowledging his service in combating human trafficking throughout his career, including as head of the Human Trafficking Unit of the London Metropolitan Police. He spoke at the World Meeting of Families 2018 in Dublin.

The theme of this conference – Human Trafficking: Hidden in Plain Sight – is very relevant for Ireland today, according to Anne Kelleher, who on behalf of APT told CatholicIreland.net: “It is the little island of Ireland stepping up as much as it can in terms of awareness so that people realise that human trafficking is hidden in plain sight, and there is so much trafficking beyond the sex trade.”

She explained that in Ireland trafficked people are involved in the drugs trade, begging, and working in car washes, nail bars and the laying of tarmac. “People come in [to Ireland]. They get their visa or permit, they are housed in terrible conditions and they don’t get paid or they get minimum of money. Their passports are taken from them and they are made to work like slaves,” she said.

The traffickers operate in rural Ireland in particular and exploit people “where they think they can go unnoticed” and they can “move people around,” Anne Kelleher explained.

APT members work closely with the Gardaí and the force has up 100 members formally trained in awareness around human trafficking. A Garda representative will be at the conference. Many APT members are from religious orders in Ireland that diversified from traditional roles such as teaching and nursing to where they are most needed in social justice and human rights. Anti-human trafficking work is very much part of that.

Anne Kelleher explained that in the last few decades many congregations have assigned members and funding to support ministering to those who are victims or survivors of trafficking, and in prevention initiatives.

For example, the Brigidines have sisters involved in Ireland and in the UK. Mercy sisters work in initiatives such as psychological services and training and have safe houses in secret locations. The Presentation sisters are involved in prevention and work in communities where the trafficked people come from – for example, former Eastern block countries such as Ukraine, Czech Republic and Slovakia.

Many of their representatives are expected to attend, and some will speak, at the conference. Speakers include Noelene Blackwell, CEO Dublin Rape Crisis Centre; Sheila Crowley, Service Manager RUHAMA; and JP O’Sullivan, MECPATHS Ireland.

Students’ perspective on human trafficking, as a curricular theme at post primary school senior level, is a topic for discussion. Transition year students from St Joseph’s Secondary School will be present. The Irish and international dimension will be explored, and how addressing root causes – gender inequality, education, secure employment and human rights – provides long-term solutions. Participants will also consider how both victim care and the prosecution of criminals of this serious crime are essential.

The APT conference is at The Atrium, Dept. of Justice & Equality, Dublin, on 1 March 2019. Places are available on a first come first served basis. To register email: [email protected].

*Santa Marta Group is an alliance of international police chiefs and bishops from around the world working together with civil society in a process endorsed by Pope Francis.