Home > Featured > Another step towards canonisation of Boys Town founder

Another step towards canonisation of Boys Town founder 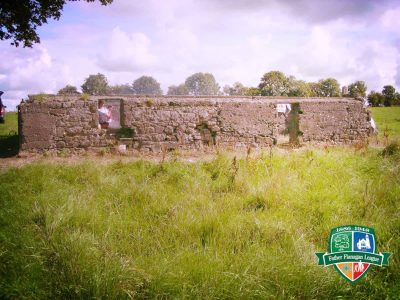 The cause for canonisation of Irish born Boys Town founder, Fr Edward Flanagan, took another step forward this week with the presentation of a summary of records on his life.

The summary, or positio, with 4600 pages of records collected by the Archdiocese of Omaha, was presented to the Congregation for the Causes of Saints on 22 July 2019.

This was accompanied by a letter of support from Archbishop George Lucas. The Omaha archbishop had met with Cardinal Becciu, the prefect of the congregation, in January.

“It has been a privilege to offer my support for the cause of Father Edward Flanagan at each stage of this process,” Archbishop Lucas said. “I was able to share with Cardinal Becciu the encouragement offered to all of us in the Church during this challenging time by the virtuous life and work of Father Flanagan.”

Leading the cause for sainthood was the Father Flanagan League Society of Devotion, which has supporters in 20 countries and more than 40,000 followers on Facebook.

“On behalf of the League, we thank Archbishop Lucas for making this personal commitment to launch the review of the Positio,” said Steven Wolf, president of the Father Flanagan League. “The Archbishop’s visit to the Vatican speaks volumes to the importance of this cause for the Catholic Church.” 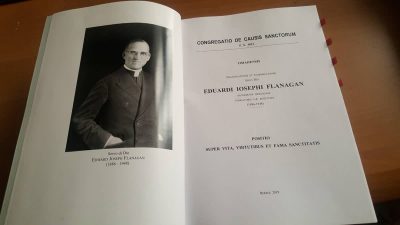 Once pronounced venerable, the next phase is beatification, which is when the person is declared “blessed” following proof of a miracle through the person’s intercession, and finally canonisation, which requires a second proven miracle.

Fr Flanagan helped at least 10,000 boys at Boys Town in his lifetime, and he became well known around the world. On 13 July 1886 Edward Joseph Flanagan was born at Leabeg (homestead) in Co. Roscommon, close to Ballymoe, Co. Galway. The ruins of the home he was raised in still exist to this day.

It is believed that he was born prematurely, and the family feared he might not survive. His grandfather Patrick held Edward wrapped in a blanket to his chest for hours at a time, sitting next to the hearth in their kitchen. He was the 8th of 11 children of John and Nora Flanagan who lived on a farm. Edward was baptised at the parish of St Croan in Ballymoe.

The League stated that the Flanagans were a devout, religious family who prayed the rosary. Sometimes young Edward and his father would pray the rosary together in the rain when they were looking for lost sheep.

He attended Drimatemple National School, near his home, began his secondary education in 1901 at Summerhill College, Sligo, when he was 15, and completed it at 18 .

He is reported as having said: “The old-fashioned home with fireside companionship, its religious devotion and its closely-knit family ties is my idea of what a home should be.” He said that his father told him stories that were interesting to a child about adventure and the struggle of the Irish people for independence.

He emigrated to the US in 1904 and was ordained a priest in 1912. He was assigned to what was then the Diocese of Omaha. He rose to national and international prominence for his work. Spencer Tracy won an Oscar for his portrayal of Fr Flanagan in the 1938 movie Boys Town.

Father Flanagan died in Berlin of a heart attack on 15 May 1948. His corpse is interred in a memorial chapel at Boys Town.