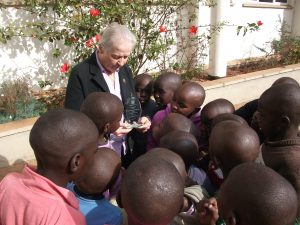 A Loreto missionary from Dublin has been honoured by the Ministry of Health in Kenya for her timeless service and dedication to the country’s Anti-Retroviral Therapy (ART) Programme.

Sr Mary Owens IBVM acts as executive director of Nyumbani Village, a non-profit, self-sustaining community that supports and cares for both orphans and elders infected with or affected by HIV/AIDS in Kenya.

It is located in Kitui, a three-and-a-half hour drive east of the Kenyan capital Nairobi.

In June, Sr Mary was honoured by the state for the programme the organisation runs and which provides quality HIV care, treatment and support to those infected or affected by HIV and is part of the health ministry’s National AIDS and STI Control Programme.

Over 200,000 children under 14 years are infected with AIDS, and it is estimated that 1.1 million children are orphaned due to AIDS in Kenya.

Sr Mary, who is a native of Dublin, arrived in Kenya in 1969. She holds a BA degree in education from UCD and an MA in education and counselling from TCD.

Along with an American Jesuit priest doctor, Fr Angelo D’Agostino, she set up Nyumbani Children’s Home in a rented house in Westlands, Nairobi in 1992 because orphanages in Kenya were turning away infants with HIV/AIDS.

They envisioned a self-sustaining village which would cater for 1,000 children and 100 Susus or grandparents, the two generations left behind by the HIV/AIDS epidemic.

According to Matt Moran, author of the book, The Legacy of Irish Missionaries Lives On, Nyumbani includes the Lea Toto Outreach Programme which helps HIV-positive children and families in the wider community, and operates a diagnostic laboratory, which is grant-aided by Misean Cara.

The high-tech equipment allows for faster and more accurate HIV/AIDS diagnosis and testing.

In 1999, with funding from USAID, Lea Toto became a full community-based care programme charged to carry out a project targeting HIV positive children in the Kangemi slums of Nairobi, and now supports over 3,000 children.

“Nyumbani has grown to become an environmentally sustainable and economically self-reliant community under Sr Mary’s expert guidance,” according to Matt Moran.

He also explained that since 2012, a number of Ursuline Sisters have been working at Nyumbani in a collaborative arrangement between the Loreto and Ursuline congregations.

“The only one of its kind when it was established in 1992, Nyumbani Children’s Home offers life-changing comprehensive medical, nutritional, dental, life-skills, psychological, academic and spiritual care. Typical of missionary development projects, it takes a holistic or whole-child approach to care, rehabilitation, and accompaniment. It goes beyond simply providing essential health services for a child,” Matt Moran explained.

In each of the cottages there is a surrogate family with 14 children and a house parent, usually a grandparent. Inter-generational companionship, a quality education, and post-graduation career counselling help ensure successful reintegration into their own families, tribal communities, or independent living.

According to Moran, a former CEO of Misean Cara, “The growth and success of Nyumbani programmes – Children’s Home, Leo Toto Community Outreach Programme, and the Village with a primary, secondary and polytechnic schools with around 1,000 students – reflect Sr Mary’s tremendous dedication to the health and care of those infected and affected by HIV/AIDS in Kenya who can grow into confident and happy children within native cultural traditions.”

In 2010, Sr Mary was nominated for the Jonathan Mann Award for Global Health & Human Rights.

Sponsored by John Snow Inc., the International Association of Physicians in AIDS Care, and the Global Health Council, the award is bestowed annually on a leading practitioner in health and human rights.

In a submission to Irish Aid’s public consultation on Ireland’s overseas aid programme, Sr Mary explained something of her outlook stating, “First and foremost, we give aid because it is right that we help those in greatest need. We are bound together by more than globalisation. We are bound together by a shared humanity. The fate of others is a matter of concern to us. From this shared humanity comes a responsibility to those in great need beyond the borders of our own state.”