Home > Featured > Another increase in homelessness 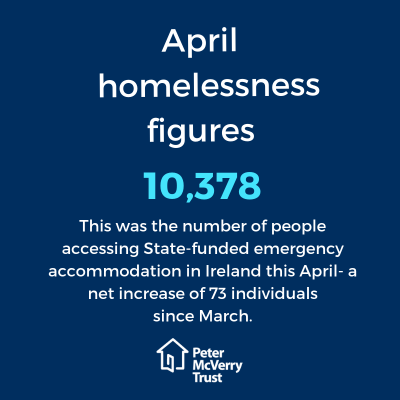 Focus Ireland has called for a fresh approach by newly elected local council members as the homeless crisis worsens, with 10,378 in emergency accommodation in April.

This is an increase of 73 people in one month alone, from 10,305 accessing State-funded emergency accommodation in March 2019, and a 7.5 per cent rise since April last year, when 9652 people were homeless.

“The electorate want this problem solved, believes it can be solved but does not believe any party has yet put forward the solutions that are needed to solve it. It is up to the newly elected councillors to show what can be done,” he added.

The charity said that much good work is being done, but the crisis will continue unless there is a substantial increase in social housing and a move away from emergency accommodation and hubs.

“Councillors must not take the approach that there is nothing they can do, and that the crisis is a matter for their officials or for the Minister. The legal responsibility for tackling homelessness lies with local councils. The long-term legacy of the 2019 local election should be a new approach to tackling homelessness and a new relevance for local government,” said Pat Dennigan.

The Department of Housing, Planning and Local Government figures also show that 3794 of those who are homeless are children (in 1729 families). A total of 94 families (with 137 children) became newly homeless in Dublin alone in April. This is the highest ever number of families to become homeless in April, according to Focus Ireland.

However, there was a decrease of just 27 children in emergency accommodation compared to figures released in March 2019.

While welcoming the decrease, Barnardos urged the government to ensure that children who continue to experience what it called “the trauma of homelessness” have access to dedicated supports, including family support workers.

“They are impacted emotionally by not having their own space to play and explore. The practicalities of doing homework are particularly challenging, with no space to write or read quietly. Social development is impacted as after-school activities are limited,” said Suzanne Connolly, CEO, Barnardos.

“Older children, particularly teenagers, have to grapple with that and whether or not they tell their friends and peers about their living circumstances and do not have the opportunity to bring their friends home,” she said, adding that parents are also stressed trying to manage in cramped and unsuitable environments, leading to mental health difficulties that could restrict their capacity to parent.

“The government cannot continue to allow families languish in such living circumstances. In the absence of real social housing output the government must provide funding for services and support workers to help families cope and manage these circumstances,” she said.

The infrastructure to support families living in emergency accommodation already exists in the community, but funding is needed to extend this infrastructure to adequately deal with the number of families experiencing homelessness.

Mr Eoghan Murphy, Minister for Housing, Planning & Local Government, said that the figures for April show an overall increase in emergency accommodation compared to March, but a small reduction in the numbers of families in such accommodation.

“Family homelessness continues to be very challenging, particularly in the Dublin area. So far this year we have exited more than 320 families out of emergency accommodation into a home, which is some progress, but clearly, we need to do a lot more. My Department is working closely with the local authorities to deliver homes for every family in emergency accommodation,” said Mr Eoghan Murphy.