Home > Featured > Another first! Ireland first in world to divest from fossil fuels

Another first! Ireland first in world to divest from fossil fuels 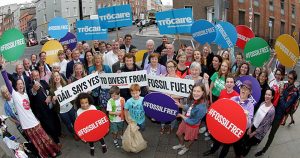 Celebrations outside Leinster House as the Dáil says yes to divest from fossil fuels on Thursday. (Photo: Mark Stedman)

Ireland is set to become the world’s first country to sell off its investments in fossil fuel companies.

The Dáil passed the Fossil Fuel Divestment Bill on Thursday. The bill is expected to pass rapidly through the Seanad, meaning it could become law before the end of the year. The law will compel the Ireland Strategic Investment Fund (ISIF) to sell off its investments in the global fossil fuel industry, which as of June 2017 stood at €318 million across 150 companies worldwide.

“The [divestment] movement is highlighting the need to stop investing in the expansion of a global industry which must be brought into managed decline if catastrophic climate change is to be averted,” said Independent Deputy Thomas Pringle, who introduced the bill.

“Ireland, by divesting, is sending a clear message that the Irish public and the international community are ready to think and act beyond narrow short-term vested interests.”

The bill was backed by the Government, following recent Cabinet approval. Mr Pringle said he was delighted the bill completed all stages in the Dáil after months of negotiation with the Department of Finance. “Not only is this a testament to cross-party cooperation and support on the issue of climate change in Ireland, but a victory for the international fossil fuel divestment movement too.”

Éamonn Meehan, executive director of the Catholic aid agency Trócaire, which liaised with the Government on the bill at committee stage, said the passing of the Fossil Fuel Divestment Bill has made history. “Ireland is the first country in the world to commit to withdrawing public money invested in fossil fuels, the industry which is contributing most to climate change.”

“The bill is both substantive and symbolic,” he added. “It will stop public money being invested against the public interest, and it sends a clear signal nationally and globally that action on the climate crisis needs to be accelerated urgently, starting with the phase-out of fossil fuels.”

Mr Meehan said that climate change is one of the leading drivers of poverty and hunger in the developing world, and that its devastating impact is seen every day. “Extended droughts, floods and storms have already contributed to the deaths of hundreds of thousands of people, with millions more facing hunger and in need of urgent aid just to survive.

“Ireland has gained a reputation internationally in recent years as a ‘climate laggard’. Just last month Ireland was ranked the second-worst European country for climate action, so the passing of this bill is good news – but [it] has to mark a significant change of pace on the issue.”

The Fossil Fuel Divestment Bill is the culmination of more than two years’ work by Mr Pringle, Trócaire, other civil, activist and student groups, and the Global Legal Action Network (GLAN).

Explaining the urgency of the bill, Global Legal Action Network’s legal officer Gerry Liston said governments would not meet their obligations under the Paris Agreement on Climate Change if they continued to financially sustain the fossil fuel industry. “Countries the world over must now urgently follow Ireland’s lead and divest from fossil fuels,” Mr Liston said.