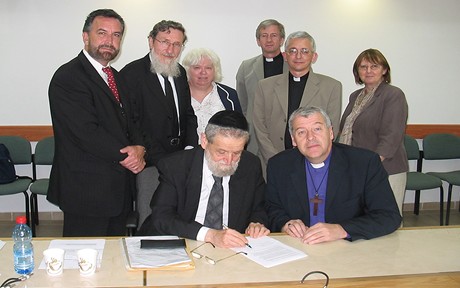 The Anglican Jewish Commission of the Chief Rabbinate of Israel and the Office of the Archbishop of Canterbury will meet in Dublin next week for the first time since its foundation.

The conference, which is organised between the Chief Rabbinate of Israel and Lambeth Palace, will meet from Monday 31 March until Wednesday 2 April.

The meetings will take place in the Taca Hall at Terenure synagogue and will focus on the theme of ‘Memory, Community and Identity’.

The Archbishop of Dublin, the Most Revd Dr Michael Jackson, is the Anglican co-Chair of the Commission, shared with Acting co-Chair Rabbi Rasson Arousi, Chief Rabbi of Kiryat Ono.

The Commission’s three-day visit will include a reception at Áras an Uachtaráin hosted by President Michael D Higgins.

Among the invited guests will be the Archbishop of Armagh, the Most Revd Richard Clarke; Archbishop Diarmuid Martin of Dublin; the papal nuncio, Archbishop Charles Brown; Rabbi Zalman Lent of the Dublin Hebrew Congregation; and Rabbi David Singer of Belfast Jewish Community.

The Commission will also visit the Chester Beatty Library, the Irish Jewish Museum, and Dr Jason McElligott, Keeper of Marsh’s Library will give an after dinner speech regarding items of interest to members of the Commission.

The Dean of Christ Church Cathedral in Dublin, the Very Revd Dermot Dunne, will host a reception for the Commission members and leaders from Dublin’s different religious communities.

The Archbishop of Canterbury’s Commission with the Chief Rabbis of Israel was established in 2006 in order to facilitate deep understanding between two historic World Faiths.

The meetings have alternated between the Holy Land and Britain and this is the first to be held in Ireland.

When he was Bishop of Clogher, Archbishop Michael Jackson was appointed by the Archbishop of Canterbury to be the Anglican co-chair along with Chief Rabbi Cohen of Haifa.

The Rabbis and the members of the Anglican delegation have considerable experience in the fields of inter faith relations and dialogue.

The Anglican Bishop of Jerusalem, Bishop Suheil Dawani, is a member of the Commission and will be coming to Dublin and contributing to the dialogue.

The Archbishop of Canterbury and the Chief Rabbis of Israel meet on a regular basis to review the implications and opportunities afforded by the dialogue and discussion of the Commission.