Andrea Bocelli to headline Festival of Families at Croke Park 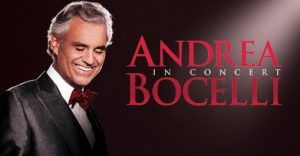 Organisers of the World Meeting of Families have confirmed that the world-renowned tenor, Andrea Bocelli, will sing for Pope Francis at the Festival of Families in Croke Park on 25 August.

It is expected to be one of the highlights of the WMOF2018.

Andrea Bocelli will take centre stage in Croke Park Stadium on Saturday evening and will join a cast of thousands already announced for the event.

In June, the Irish Independent revealed that a performance by Bocelli was on the cards and confirmation of his participation comes as the WMOF2018 enters the final phase of planning for its international gathering that will see families from 116 countries attend a series of events beginning on 21 August and culminating with the visit of Pope Francis on 25 and 26 August.

“We are delighted to announce that Andrea Bocelli will be with us for our celebration of family life in the presence of Pope Francis. He will bring so much to our gathering not just because of his wonderful talent but because of his love for his faith. We are honoured that he has taken time out of an intensely busy schedule to come to Ireland to be part of our global celebration of family life,” Fr Timothy Bartlett, Secretary General of WMOF2018 said on Friday.

Andrea Bocelli has met Pope Francis and has performed for him on more than one occasion, including at the last World Meeting of Families, which took place in Philadelphia in 2015.

He is a devout Catholic and he has spoken openly many times about the importance of faith and how it takes first place in his life. He has regularly donated his time and talent to causes and events that he is passionate about.

Commenting ahead of his performance at the Dublin gathering of families he said, “Singing before Pope Francis is a privilege for our soul; it is an honour for what the Supreme Pontiff represents in the world. For the indescribable human fragility, typical of the average man such as myself, it brings me great pleasure and immense satisfaction to even have the privilege to be close to a person of such exceptional importance and grace.

“It is a joy to be able to offer my most modest contribution on the occasion of this grand meeting and moment of reflection about the family. The family remains the strongest building block of society, a cluster of affection, and a privileged space in which one can teach and learn – in every action – how to choose a life that leads toward the greater good.”

As well as these artists, the cast for the Festival of Families will include an orchestra in excess of 50 musicians; over 700 Irish, Sean Nós and contemporary dancers, including 500 from Irish dance schools across the country; a 1,000 strong choir; 100 community groups, and 300 flag bearers.

Andrea Bocelli will also be returning to Dublin at the end of the year to perform a headline show at the 3Arena on 30 and 31 October.

Andrea Bocelli is considered to be one of the most accomplished representatives of Italy’s finest vocal tradition.

His shot to fame began in 1994, when, following Franco Corelli’s teachings, he won the Sanremo Music Festival in Italy. During the same year, he also embarked in a dazzling classical career singing in operas from the most prestigious lyrical tradition, such as Macbeth, Il Trovatore, Madame Butterfly, La Bohème, Tosca as well as Werther, Carmen, Roméo et Juliette, as directed by, among others, Lorin Maazel, Seiji Ozawa and Zubin Mehta.

Over the years, Andrea Bocelli has been honoured with many awards and tributes such as the time when, in 2010, a star bearing his name was added to the Hollywood Walk of Fame.

During his career, Andrea Bocelli has performed for four presidents of the United States, three Popes, the British Royal Family and several prime ministers from different countries.

Lately, he has sung for Queen Elizabeth II, during Her Majesty’s Gala Evening in celebration of her 90th birthday which took place in the gardens within the walls of Windsor Castle.

Andrea Bocelli, however, is not only a gifted tenor and superb artist; he is also a man of principle who believes that, in the face of inequality and human tragedy, solidarity with your fellow human beings is the only adequate response.

He sees this attitude as the conditio sine qua non of any tangible and effective solutions to the problems we face in our modern society.

For Bocelli, compassion, empathy and support for the disadvantaged are not only a moral duty, but also, and most importantly, a spontaneous and genuine gesture originating from both his heart and mind.

Since the 1990s, his name has featured heavily among those of the most illustrious patrons who regularly participate in the projects and events undertaken by the most prominent charities and humanitarian organisations in the world.

In 2011, Andrea Bocelli founded the Andrea Bocelli Foundation (ABF), an international charitable organisation whose mission is to empower people and communities in situations of poverty, illiteracy and distress due to illness and social exclusion. In doing so, Bocelli has successfully drawn on the strength of the many relationships of trust and friendship he has built over the years, capitalising on his  vast network of colleagues, collaborators, friends, acquaintances and followers, thus marshalling their help towards the Foundation’s noble purpose.

At the opening of the World Economic Forum 2015 in Davos, Andrea Bocelli was bestowed the Crystal Award, a prestigious recognition of the work he has carried out as an artist, man and philanthropist.