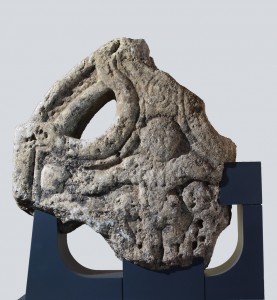 A significant fragment of the High Cross (c. 900AD) from the monastic site at Drumcullen has been brought into the local parish church of Eglish in Rath, Co Offaly.

This portion of the High Cross was first discovered in 1917 and it has been described by Professor Peter Harbison as “the most significant remnant of a once important monastic foundation at Drumcullen”.

Professor Harbison also explains that “it was only when the moss was removed that it became clear that here was a hitherto unknown old Irish High Cross-head.”

The main features are quite discernible.

At the centre is the figure of the crucified Christ with dominant rounded head, seemingly with projecting hair at ear level, and with eyes and nose at least indicated.

Christ’s short arm, slightly drooping to fit in with the contour of the cross, has a rather large hand in comparison.

The Saviour’s left arm is higher to make room for the head of Longinus, the top of whose spear apparently pierces Christ’s left armpit.

He is balanced on the other side by the head of Stephaton, for whose body there was no room, and whose offer of hyssop by means of a chalice-like vessel on top of a pole may be intimated by a triangular shape immediately beneath Christ’s chin.

“This detail we can reconstruct on the basis of comparison with Crucifixion scenes on other High Crosses such as the one from Tihilly where, likewise, there is a spiral ornament above Christ’s head,” according to Professor Harbison.

The monastery from which the High Cross came may have been more important than the meagre records of its history would suggest.

There are a number of saints associated with the place.

One was a lady, Ríoghnach, patron of the parish of Reynagh (now Banagher), who shared her name with a sister of St Finian of Clonard.

Bishop Michael Smith presided at the Blessing of the High Cross fragment on 6 February 2016 in the Church of St John the Baptist, Rath.