An ecumenical first as Pope visits Anglican church in Rome 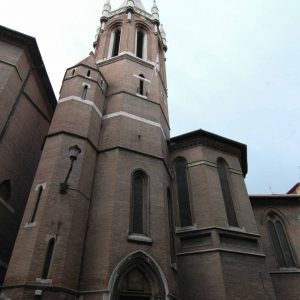 The Anglican All Saints’ Church in Rome

When Pope Francis prayed at All Saints’ Church in Rome on Sunday afternoon, he made another little piece of ecumenical history: he became the first pontiff in history to visit an Anglican church in the Italian capital.

The visit, which saw Pope Francis participate in an Evensong ceremony, marked the 200th anniversary of All Saints’ Church. He was welcomed to the church by the Church of England Bishop in Europe, Robert Innes, and the chaplain of All Saints, Fr Jonathan Boardman.

The event is a sign of the growing warmth in relations between the two churches. And if that wasn’t good news enough for all who pray for church unity, Pope Francis used the occasion to speak of a possible joint visit by himself and the Archbishop of Canterbury, Justin Welby, head of the Anglican Church, to South Sudan, where the Christian community, Catholic and Anglican, are suffering as a consequence of a civil war and a resulting famine.

Last October, South Sudanese Catholic, Anglican and Presbyterian bishops visited Rome to discuss the situation in their country and to invite Pope Francis to visit them. Pope Francis said any visit by him and Archbishop Welby would be only for a day, because of the tensions in that country.

During the visit to the Anglican church, Pope Francis and Bishop Innes also blessed an icon of Christ the Saviour, which was created at the Bethlehem Icon Centre, an initiative to revive iconography as a living art in the Holy Land.

The split between the Church of England and the Catholic Church dates back to 1534, when Rome refused to annul the marriage of King Henry VIII of England.

Previously, relations between the English royal house and Rome had been excellent. Indeed, Henry had been awarded the title ‘Defender of the Faith’ (‘Fidei defensor’) after he had written abook, Asertio Septem Sacramentorum (Defence of the Seven Sacraments).

In the book he had defended the sacramental nature of marriage and the idea of Papal supremacy, among other things. To this day, the abbreviation FD or FidDef appears on all UK coins, along with a portrait of the monarch’s head in profile.

Fr Boardman has served as chaplain at the Church in Via del Babuino, across the river from the Vatican, for 18 years. Speaking to Vatican Radio, he talked about the history of the Anglican community in the Eternal City. The church’s presence there dates back to 1815 and the years following the Battle of Waterloo, as there were no English in Rome during the Napoleonic wars.

As the Papal States had been restored, in part by British intervention, “there was a great deal more tolerance to permit those foreigners to worship in their own rite”. The first Anglican service in Rome was on 27 October 1816, when four worshippers were present; there were twenty there the following Sunday and fifty the week after.

The group were given the use of a chapel in a converted granary, where they worshipped from 1827 to 1887, after which the parish moved to the neo-Gothic  church that it occupies to this day. According to Fr Boardman, when the Pope of the time, Pius VII, was asked if the Anglicans had permission to worship in the city, he said “what the pope doesn’t know, the pope doesn’t have to approve”.

Certainly the current Pope knows about All Saints’ Church and approves of the growing warmth in the relationship between the two churches.