Amy Huberman teams up with Barnardos 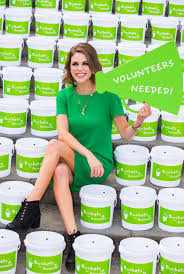 Children’s charity Barnardos has teamed up with Amy Huberman to promote its National Collection day on Friday 19 September.

The actress and author is appealing for help for the children of Ireland for second year in a row.

“It breaks my heart to think that right now in Ireland one child in 10 is living in consistent poverty,” Amy Huberman commented.

“That means a child going 24 hours without a substantial meal, maybe not having a proper winter coat, or being cold in their home because the family is unable to afford to heat it.”

She added, “By volunteering on Friday September 19th you can help Barnardos to change a child’s life and bring hope into situations where it may have been lost.”

Buckets for Barnardos is the national collection day taking place in towns and cities across Ireland to raise funds for the charity’s work with children and families.

This year’s collection is supported by Mondelez Ireland ensuring that 100% of a donation will go directly to fund Barnardos work.

“Over the last few years, pressure on Barnardos services has become more intense while demand for Barnardos help is greater than ever,” Barnardos Chief Executive Fergus Finlay said.

“The issues we are dealing with on the ground have become more complex and we see families facing extreme hardships every day.”

In the charity’s Annual Report 2013 published in April this year, Fergus Finlay wrote that there are enough children living in ‘consistent’ poverty to fill every seat in the Aviva Stadium more than twice.

He explained that a child in consistent poverty in Ireland is more likely to be under-nourished, or even hungry.

They are more likely to be cold and wet during bad weather and have a chest infection because of damp housing. They will be more afraid because of danger in the community in which they live.

The knock-on effect is that these children are less likely to learn, and to finish school. This consistent poverty grinds and wears childhood out, he wrote and it gets in the way of a child’s potential.

Barnardos works with over 8,900 children and families in 40 projects throughout Ireland.

For example Barnardos recently partnered with Kelloggs to provide breakfast to children attending its services in communities across Ireland and also to school children who attend Barnardos Breakfast Clubs.

This supports children’s attendance and participation in education. By ensuring children have a nutritious breakfast each morning, they can concentrate throughout the day, enabling them to learn and achieve their potential in life.