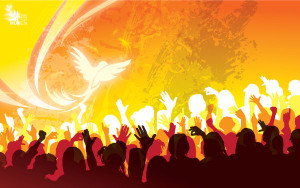 The National Charismatic Renewal Conference returns to the RDS this year after an absence for more than a decade.

It has been held elsewhere but this venue holds memories for many who have attended over the years.

“The national conference is a joy-filled time. People enjoy being together and praising God and singing. We hope people will gain encouragement and inspiration,” Sr Bridget Dunne, chairperson of the National Service Team of the Catholic Charismatic Renewal (CCR) said.

“We try to be open to each other and accept one another.”

Sr Bridget told CatholicIreland.net that up to 1,000 people are expected to attend and there will be participants from many different groups throughout the country ranging from those with half a dozen members to those with 20 or a couple of hundred members.

This year the main speaker is Ralph Martin from Michigan in the USA who hosts his own Catholic TV and radio show ‘The Choices We Face’.

He is involved in Renewal Ministries which helps the Church in more than 30 countries with leadership training, evangelisation conferences and retreats, and by publishing and distributing Catholic resources. 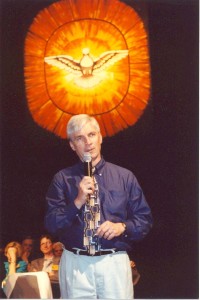 This is a return visit for Ralph Martin who has been in Ireland before for both charismatic conferences and the Tine Catholic Leaders Network conference.

In December 2011, Pope Benedict XVI appointed Ralph as a Consultor to the Pontifical Council for the New Evangelisation for a five-year term.

Archbishop Diarmuid Martin and Bishop Martin Drennan will be the main celebrants at Masses on Saturday and Sunday respectively.

“We like to have speakers other than Catholics too. Something of our calling is to ecumenism,” Sr Bridget said.

As well as her work with the Charismatic Renewal, Sr Bridget is a Sister of La Retraite which has houses in Cork, Galway and Dublin.

The members of the order accompany people on their journey in life with retreats etc. They were considered audacious when they opened the first ever retreat house for women in France centuries ago. 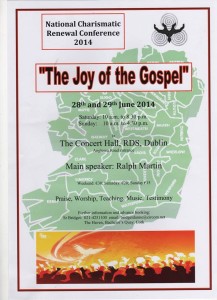 The theme for the conference ‘The Joy of the Gospel’ reflects both the title and the spirit of Pope Francis’ papal exhortation Evangelli Gaudium.

Quoting the opening sentence, Sr Bridget said: “The Joy of the Gospel fills the hearts and lives of all who encounter Jesus”.

She said the Holy Father goes on to invite all Christians “…at this very moment, to a renewed personal encounter with Jesus Christ, or at least to an openness to letting Him encounter them …. whenever we take a step towards Jesus, we come to realise that He is already there, waiting for us with open arms.”

He reminds us that “Being a Christian is not the result of an ethical choice or a lofty idea, but the encounter with an event, a person, which gives life a new horizon and a decisive direction.”

The national conference has had steady attendances over the last number of years having been held in Citywest in Dublin, Athlone and elsewhere.

Regional conferences have also proved very popular in these economically difficult times as people find it easier to go local. These conferences are being held in Limerick, Waterford, Cork/Kerry and Galway this year.

The National Charismatic Renewal Conference takes place in the Concert Hall in the RDS, Dublin on Saturday 28 and Sunday 29 June.
www.charismaticrenewal.ie