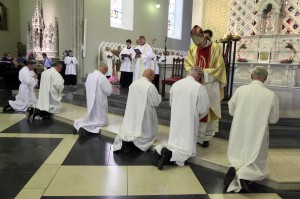 Catholic communities in the Amazon may see married men ordained to the priesthood under certain restrictions if Pope Francis proceeds with the recommendations contained in the Amazon Synod’s Final Document.

The 33-page document’s recommendations, which were discussed between 6-26 October, were approved on Saturday and then handed over to Pope Francis.

The synod brought together bishops, clerics, representatives from indigenous communities in the Amazon, religious orders, lay groups and charities, to discuss a range of pressing issues challenging the South American region.

The proposal on lifting the restriction on ordaining married men limits it to those who are already permanent deacons.

The Final Document recommends that the Church “establish criteria and dispositions on the part of the competent authority… to ordain as priest suitable and esteemed men of the community, who have had a fruitful permanent diaconate and receive an adequate formation for the priesthood, having a legitimately constituted and stable family, to sustain the life of the Christian community.”

It has not been proposed for the global church, but specifically for the Church in the Amazon, a massive nine-country region with some of the most remote indigenous communities on the planet.

Here, the lack of priests means some parish communities only see a priest infrequently and otherwise attend lay-led liturgies.

“Many of the ecclesial communities of the Amazonian territory have enormous difficulties in accessing the Eucharist,” the document states and notes that some communities go for months, even years, between visits from a priest.

The Synod fathers affirmed celibacy saying they “appreciate celibacy as a gift of God to the extent that this gift enables the missionary disciple, ordained to the priesthood, to dedicate himself fully to the service of the Holy People of God.”

But, they added, “legitimate diversity does not harm the communion and unity of the Church, but expresses and serves it.”

On Saturday, the last day of the Synod, the proposal on ordaining married men passed by a margin of 128-41 and secured the backing of two-thirds of those with voting rights.

It is now up to Pope Francis as to what happens next as the Final Document itself does not have magisterial authority. The Pope’s response will be hotly anticipated and may be produced before the end of the year.

The synod document also called for new and enhanced ministerial roles for women in the life of the Church in the Amazon.

It called for the Church to “recognise and promote [the leadership of women] by strengthening their participation in pastoral councils of parishes and dioceses, or even in instances of government.”

The bishops highlighted that in the Amazon “the majority of Catholic communities are led by women,” and asked, “for the institution of a ministry for ‘women’s leadership of the community’ to be created and recognised within the service of the changing demands of evangelization and community care.”

The bishops also noted that in a large number of the consultations – there were 87,000 consultations before the opening of the Amazon Synod on 6 October – the permanent diaconate for women was requested.

“For this reason the theme was important during the synod,” the bishops stressed but they also acknowledged that Pope Francis did create a commission to examine the question of women deacons in 2016.

Responding to the recommendations, Pope Francis announced that he would be recall the commission on women deacons and ask it to take up the matter again.

He will also add new members to its ranks.

Referring to the bishops’ recommendation, the Pontiff said at the close of the Amazon Synod, “I am going to take up the challenge that you have put forward, that women be heard.”