Home > Featured > There is always an excess in God’s love: Cardinal Tagle

There is always an excess in God’s love: Cardinal Tagle 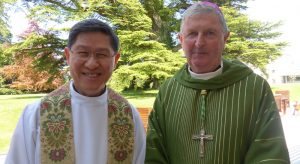 The world is already broken and many people are wounded, the head of the Church in the Philippines said this week.

One of the key messages Cardinal Luis Antonio Tagle shared with the priests of the Diocese of Meath during their annual retreat stressed that it won’t be healed by harsh words.

The Cardinal was invited by Bishop Michael Smith to conduct the retreat which began on Sunday 15 May and concluded on Thursday 19 May.

It was attended by over 70 priests from the diocese, as well as a number of priests from Cavan and Longford and some Columban missionaries who worked with the Cardinal in the Philippines.

In a wide-ranging series of reflections, which included three presentations each day, the Archbishop of Manila focused on a message of “ministry and mercy”, based on the theme of the Jubilee of Mercy, opened by Pope Francis last November.

“Jesus invites you to experience at close hand the wounds that people feel today, to touch them and share their pain” the Cardinal said.

“The priesthood of Jesus calls us away from pride and ambition.  It places before us a path of compassion and service.  You too, as priests, are products of God’s mercy”.

During the course of his week-long visit to Ireland, Cardinal Tagle visited the Columban missionaries in Dalgan Park, Navan to thank them for their service in his country.

As President of Caritas International, the Cardinal visited Trócaire, the Caritas partner agency of the Irish Episcopal Conference, and attended the annual Trócaire lecture in Maynooth on Thursday 19 May, delivered by Peter Sutherland.

On Friday 20 May, Cardinal Tagle celebrated Mass in the Cathedral of Christ the King, Mullingar for members of the Filipino community in the Diocese of Meath. 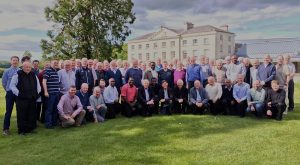 On retreat with Cardinal Tagle, priests of the diocese of Meath.

“It has been an enormous privilege and a very great blessing to have the Cardinal with us” newly ordained Fr Noel Weir said at the end of the retreat.

“He really raised our spirits and shared inspiring insights from the Scriptures as well as from his vast experience as a pastor, particularly from his work of Caritas International.”

“It was clear to us that the Cardinal is very close to Jesus. If we can take his words to heart, we will become better priests and we will awake the gift of God’s abundant mercy in our ministry with people.”

Archbishop Tagle was interviewed by icatholic and the interview will be available to view at www.icatholic.ie over the coming days.