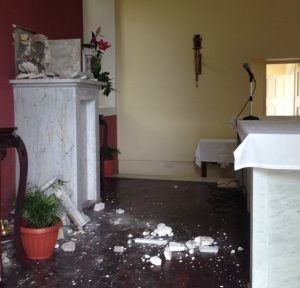 Bishop Francis Duffy of Ardagh & Clonmacnois has appealed for help in locating the tabernacle which was forcibly removed from an altar and stolen from a church early on Easter Sunday.

The parish of St Michael’s Church in Shroid, outside of Longford Town, was in shock yesterday after the grim discovery was made as the church was being opened up on Easter Sunday morning for ceremonies on the holiest day in the Catholic calendar.

According to the Longford Leader newspaper, extensive damage was caused to the altar in the small church and a number of items were stolen, including the tabernacle.

Bishop Francis Duffy of Ardagh and Clonmacnois visited the church yesterday following news of the break-in.

Speaking afterwards, he described what had occurred as an “act of desecration”.

Dr Duffy told the Longford Leader that the act of desecration was “disrespectful to religion and to the local community”.

“It is extremely upsetting for the parishioners and the clergy here in Longford that something like this could happen, but especially during Holy Week.”

He explained that the tabernacle is the centrepiece of every Mass as it holds the sacred communion hosts.

“It holds the bread that we believe has been transformed into the body of Christ. That is what we believe and that is why this act of desecration is so distressing.”

He added that the tabernacle was of great significance to the local parish.

“We would love to be able to get it back so I appeal this Easter Sunday morning for anyone with any information to contact the Gardaí at Longford Garda Station on 043 335 0570.”

The Garda investigation of the theft continues.