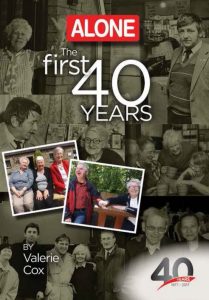 Every week, over 1,000 older people nationwide receive support from Alone, an organisation helping them to age at home.  The forty year history of the charity is marked in a book telling its story.  ALONE: The First 40 Years is written by popular writer and broadcaster, Valerie Cox and published by Veritas.

The book records the founding of the charity in 1977 by a young fireman Willie Bermingham, after he discovered the bodies of three older people in their homes. It also chronicles the charity’s achievements including the housing complexes it built, and the thousands of people who have been befriended by the charity’s inspiring volunteers.

“Working on this book gave me a firsthand account of the issues faced by older people in Ireland – whether it is loneliness, a lack of support, or housing,” said author Valerie Cox. “A lot has changed since 1977, but ALONE is still needed today more than ever,” she said, adding, “This book is dedicated to the unsung heroes of ALONE, those who continue to volunteer, donate and work to support the older members of our communities.”

While the organisation continues to provide a very valuable service to older people,  Alone – The first 40 years, “is also a story of the joy and laughter between people, which friendship and support brings,” said ALONE CEO Sean Moynihan.

“As an organisation that works with older people, we see firsthand the effects of loneliness. I don’t think that people are aware of just how devastating loneliness can be for your general health,” he told CatholicIreland,  pointing out that loneliness not only led to depression but was also a predictor for dementia, cardiovascular disease and decreased immune system responsivity.

“Every day our volunteers bring company, joy, and support to older people. ALONE’s Befriending Services can act as a preventative health measure in tackling the effects of loneliness among older people,” he added. Currently ALONE has over 600 befriending volunteers.

Priced at €15.00, all the proceeds from sales of the book will go directly to ALONE’s services which include a nationwide befriending network with hubs in thirty three towns, as well as cities like Limerick, Waterford, Cork and Dublin. The agency also works to help elderly people in their homes – painting and decorating or tidying up gardens through Corporate Volunteer schemes and advocating for the elderly. 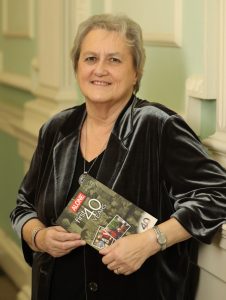 “As Ireland’s ageing demographic increases, and one third of older people now live alone, community supports and services are required to enable older people to remain in their own homes for as long as possible,” said Sean Moynihan. “Our aim is to grow and develop our services to ensure that every older person who needs support it has access to it.”

This is Valerie Cox’s fourth book. Her previous books are Searching, which tells the story of Ireland’s missing people, The Family Courts and A Ploughing People.

Telling the stories of ordinary people in both urban and rural Ireland has been the hallmark of Ms Cox’s work with RTÉ radio where she worked on Morning Ireland, Drivetime and the Today Programme, tackling stories like the problems of accessing the Fair Deal scheme, the closure of rural Garda Stations and Post Offices, the lack of end of life facilities, and caring for older people in the community and the plight of people facing the danger of losing their homes.

Ms Cox has worked with ALONE on a number of occasions, meeting some of the people who are at the heart of the book: the older people they support and their volunteers.  The mother of five is a patron of Wicklow Hospice.