All set for Divine Mercy conference 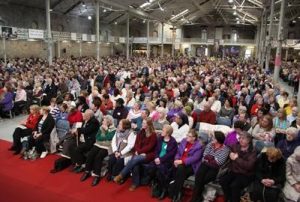 All roads will lead to Ballsbridge in Dublin from 24 to 26 February for the 26th Divine Mercy Conference. The Conference begins on Friday evening, 24 February and runs until late afternoon on Sunday 26 February.

Don Devaney, one of the organisers, described the Divine Mercy to Nationwide, saying that people come for “healing, peace and consolation, and community and fellowship. God’s mercy is for everybody and everybody needs God’s mercy. The people come together to pray for our country.”

In previous years the conference has addressed issues such as homelessness, addiction and the plight of prisoners. “We pray for whatever issues are going on in the country – we pray for them here,” said Mr Devaney.

This year the conference will focus in particular on the defence of the unborn, with Denise Kelly from the Pro Life Campaign addressing the conference on the Saturday morning.

Every year the conference attracts thousands of visitors from Ireland and abroad. This year, in addition to public transport links, chartered bus loads of groups will be making the journey to the RDS from Clare, Cork, Drogheda, Dundalk, Kilkenny, Limerick, Monaghan, Mullingar, Portadown, Toome in Co. Antrim, and Westmeath.

While an older age profile is drawn to the conference, young people from groups like Youth 2000 and Pure in Heart will typically attend the gathering too.

The opening evening of the conference, which is free to the public, will feature Mass and a holy hour with music. Doors open at 6.30 pm. The Saturday event costs €30 and Sunday €20, but a weekend ticket may be purchased at the door or online for €35.00.

The Archbishop of Dublin Dr Diarmuid Martin will be the main celebrant at the Mass on Saturday 25 February at 5.00 pm.

Mr Stackpole, who will also address the conference on Sunday, was an ordained Anglican pastor before becoming a Catholic in 1994. After his entry into the Catholic Church, he married a Catholic Canadian, and they went to Rome together, where he obtained a Doctorate in Theology from the Pontifical University of St Thomas Aquinas.

In 1997 he began work as the Research Director, and later Director, of the John Paul II Institute of Divine Mercy based in Stockbridge Massachusetts, a position he still holds. He is the author of many journal articles and books on the Divine Mercy message and devotion, including Divine Mercy, A Guide From Genesis To Benedict XVI (Marian Press, 2009).

On Sunday morning the main speakers will be Robert Stackpole and lay missionary, author and educator Frances Hogan. Fr Bernard Mc Guckian SJ will address the conference in the afternoon.

The conference concludes with Mass at 3.15 pm celebrated by Fr Eunan McDonnell SDB.