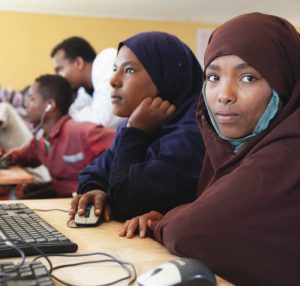 An Irish charity that recycles computers and ships them to Africa aims to improve the quality of education for five million students by 2020.

Camara Education was founded in 2005 by Irish entrepreneur Cormac Lynch. He visited Ethiopia that year and realised that computers were badly needed. He and the organisation learned that teacher training was vital to achieve Camara’s mission of transforming education using technology to empower disadvantaged students.

“In recent years we have launched the Camara Learning Academy which provides online courses teachers can access to upskill,” Ms Nolan told CatholicIreland.

Chapelizod, Dublin is the home base for Camara, where around 20 people work – most of them volunteers and interns. There are two resource centres – one in Chapelizod and the other in London – along with an education hub in Ireland and five in Africa (located in Kenya, Lesotho, Tanzania, Zambia and Ethiopia). “We don’t just work in Africa; we work in the formal and informal education sectors in Ireland too,” Ms Nolan said.

Last year the charity received almost €4.5 million, much of it from corporate sponsors. So far Camara Education has enabled more than two million young people to achieve better educational outcomes and to improve their life opportunities. Camara is looking to impact another three million students in the next two years. 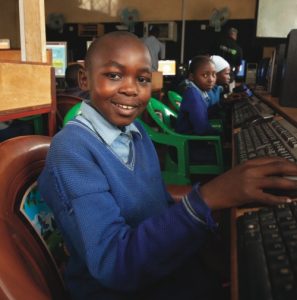 The charity accepts all computers, recycling what is unusable. “We log all computers so the public can find out what happened to their donation,” explained Ms Nolan. “In terms of help reaching five million young people by 2020 there are a myriad ways the public can help – donating their old equipment both domestically and from their places of work, through corporate and personal donations, through volunteering their time either via corporate volunteer days or volunteering personally in the workshop in Dublin or London, for example.” The charity also offers office internship positions in communications, business development and graphic design.

A technology-enabled education offers the opportunity for students in developing countries to be on a level playing field with their peers in the developed world, said Ms Nolan. “The statistics are staggering. Over 57 million children do not attend primary school. Our monitoring and evaluation has shown technology in the classroom can incentivise and encourage students to attend school and also to attain better grades.”

The charity’s iMlango project in Kenya focuses on the education of girls. “Research has shown that if you educate a girl, she is three times more likely to have a smaller, healthier family. Attendance rates dramatically improved in the iMlango schools in Kenya since the project commenced,” she told CatholicIreland.

The word camara comes from the Bantu dialect of West Africa meaning “teacher” or “one who teaches with experience”. For further information, visit Camara’s website.