Aid and prayers for Guatemala after massive volcanic eruption 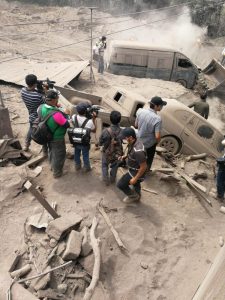 An area covered by volcanic ash

In a message, Pope Francis assured people of his closeness to the wounded and to those who are “working tirelessly” to help the victims, while asking the Lord to “bestow upon them all the gifts of solidarity, spiritual serenity and Christian hope”.

Caritas, Catholic aid agency, reported that there were pillars of fire extending 10,000 metres above sea level, and streams of lava, hot gas and volcanic matter have destroyed houses and crops and killed and injured dozens of people. Over 10,000 have been evacuated and 1.7 million people are affected. The government has proclaimed a state of disaster in Chimaltenango, Escuintla and Sacatepéquez in south central Guatemala with the intention of re-establishing infrastructure and basic services.

The densely populated towns of Los Lotes and El Rodeo have been most affected by the volcanic eruption, stated the Diocese of Escuintla. These towns are home to farmers and small landholders. The population density has made things worse and many people have been isolated from help and their workplaces.

The Church has opened shelters and a collection centre for emergency items like essential medicines, clothes and food for affected families. The Caritas Guatemala team is working in the shelters to help the people.

In one of the shelters in Escuintla was Julia Gonzales, 62, who lived with her family in the “La Reina” community in El Rodeo in Escuintla, one the most damaged communities.

“We got used to listening to small explosions under the ground and sometimes the sky over us turned grey and we thought it was normal because we lived near to the volcano, but this time was very different. In a few seconds the sky became totally dark, we saw the ash coming and knew because of the big noise that something very bad was happening,” she said.

Julia’s daughter Maria Cristina had gone out with her husband and baby daughter to sell pineapples that Sunday and sadly they died in a river of lava, and their other daughters are now orphans.

The Caritas Guatemala team is working in the shelters provided by the dioceses to evaluate and provide what the people who arrive need. The National Caritas Office of Guatemala has set up financial accounts to accept both national and international donations.

Monsignor Ángel Antonio Recinos Lemus, Bishop President of Caritas Guatemala, has called on the Caritas confederation to help these distressed families with psycho-social support, recovery of their livelihoods, construction of decent housing and other basic needs. He also applauded the impressive solidarity that has been demonstrated by the people, institutions, churches and academia as volunteers, some of whom have given their own lives to save others.

Catholic Relief Services (CRS), the international humanitarian relief and development organisation of the US Catholic Church, is also responding to the volcano.

“The Church sprang into action immediately by opening shelters and getting lifesaving relief to those who need it. But there is a lot of work to do with so many people impacted by this disaster,” said Luis Rolando Sanchez, CRS emergency coordinator for the CRS Latin America region.

He has seen more and more people arrive at shelters as hundreds are thought to have lost their homes. CRS is working with Caritas Escuintla and the local government to coordinate a response that meets the growing needs.

“What I’ve seen so far is complete destruction. Hundreds of people have lost everything and dozens of people have been killed. Some families are still searching for missing loved ones. Yet despite the unimaginable damage and heartbreak, I have hope that these communities will recover. People in Guatemala are nothing if not resilient,” he said.

The president of Guatemala has declared a state of public mourning for three days.