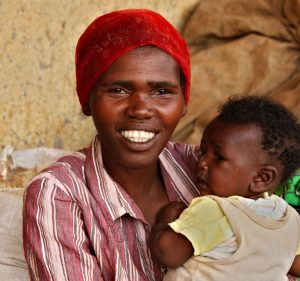 Athanasie Nirere, is part of an Irish Aid-funded project, which provided her with a loan to set up a shop for farm produce. Photo: Alan Whelan /Trócaire

Trócaire has welcomed the Budget 2018 announcement to increase overseas Official Development Assistance (ODA) by €13m. The aid agency stated Ireland is still a long way from achieving its international commitment to provide 0.7% of GNI*.

“This Budget shows progress on meeting this objective. However, the Government must now publish a timetable to outline exactly how we are going to meet our international obligations by 2025,” said Trocaire’s Éamonn Meehan.

This was something that Minister Simon Coveney highlighted recently and the importance of a clear roadmap to achieve Ireland’s long standing commitment. “Ireland’s future reputation and credibility as an international development actor hinges on meeting its 0.7% UN target for ODA by 2025 in order to contribute to achieving the Sustainable Development Goals on which Ireland played a leading role,” said Éamonn Meehan.

The charity stated that the quality of Ireland’s aid is internationally renowned for its strong poverty reduction focus, and Ireland’s ODA budget is responsible for life-changing and life-saving interventions in some of the world’s most difficult environments.

Last year alone, Trócaire reached 2.6 million people – from Syrian refugees fleeing conflict to the drought and famine in East Africa which is affecting over 25million people. Irish people have always supported Trócaire’s work and this should be reflected in a government roadmap to meet international obligations, the charity said.

Dóchas, The Irish Association of Non-Governmental Development Organisations also welcomed the increase in ODA. Suzanne Keatinge, Dóchas CEO said that the increase in the overseas aid budget is a “welcome step” towards getting Ireland back on track on overseas aid. “While the level of this increase falls far short of our hopes, it remains a step in the right direction towards reaching the agreed UN target,” she said. “This target was agreed in 2000, and if it is achieved, just 70% out of every €100 spent would be going to help the poorest and most marginalised people in the world.”

Suzanne Keatinge continued, “We are encouraged by remarks made by the Minister for Finance and Public Expenditure, Paschal Donohoe, during his budget speech today that he intends for there to be a more substantial increase in funding for aid in Budget 2019. This echoes recent comments by An Taoiseach, Leo Varadkar, and Minister for Foreign Affairs and Trade, Simon Coveney. We will hold the government to this commitment and we look forward to working with them on developing a published roadmap to achieving 0.7% by 2025.”

Dóchas also welcomed the announcement of the Value Added Tax (VAT) compensation scheme for charities in this year’s budget, which has come about as a result of a long campaign by the non-profit sector. Other charities and NGO’s also welcomed this measure among them, The Wheel, Ireland’s representative body for more than 1300 charities. “Today’s announcement is a breakthrough for charities who have been campaigning for such as scheme for decades. The VAT rebate provided through this scheme will be reinvested in vital services in areas like housing, health and social care,” said Ivan Cooper, Director of Public Policy at The Wheel.

One example of how charities are currently impacted by VAT is that of  the North and East Housing Association, which recently built nine houses in north county Dublin at a cost of €1.25m. On top of this, the association paid €172,980 in unreclaimable VAT – more than the cost of another family home. An anomaly in EU tax law prevents charities reclaiming VAT expenses. To address the issue, the EU Commission approved a ‘refund mechanism’ at national level. The announcement comes two years after former Finance Minister, Michael Noonan, published a Budget report on the issue.

*CSO measurement of national income as of July 2017 is modified GNI.