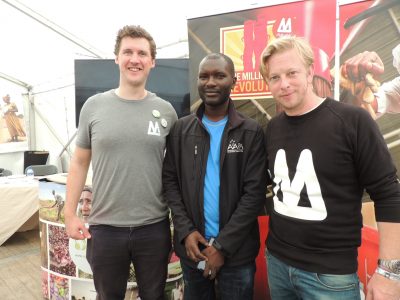 Coffee farmers in Ethiopia are sending their home-roasted coffee beans to Ireland and Europe and getting a fairer price.

On the Self Help Africa stand at the 88th National Ploughing Championships one small company, Moyee, was serving its coffee and highlighting what can and needs to be done to help change the economy of countries like Ethiopia that are most associated with famine and aid agencies.

Killian Stokes and Shane Reilly had experience of seeing some of the best coffee in the world being grown in Africa and South America. They realised that many of the farmers in these remote areas get around 30 cent for coffee cherries, less than 1 per cent of what we pay for them in Ireland. The global coffee market is dominated by multinationals and the price for farmers has decreased over the years.

“The problem is farmers all over the world are not paid sufficiently – less that $2 a day,” Killian Stokes told CatholicIreland.net. “Even though these coffee farmers are working morning noon and night their children are going hungry and needlessly getting diseases and sickness like diarrhoea – things that shouldn’t happen. They die from poverty because they don’t get the right nutrition.”

The Moyee coffee company that he and his colleagues set up aims to change that. It cuts out the middlemen and pays the coffee growers 20 per cent more.

Generally the coffee farmers earn $400 a year, but they need just over $1000 to have a living wage. Killian Stokes, who worked for Concern in the past, says this 20 per cent brings their income to $480, but this is not enough at all. Helping the farmers to process and wash their own coffee cherries and sell the green bean means the farmers’ income is improving. Moyee has a facility where it roasts the coffee, and it employs 40 people in the capital of Ethiopia, Addis Ababa.

Moyee is also working with the farmers to help them improve their organic farming techniques so they can double their yields and bring their income to $1000 a year.

The coffee is grown, processed, roasted and packed in Ethiopia and shipped to Ireland where Moyee sells it to creative, high tech and other companies and organisations which provide free coffee in the workplace. They targeted the workplace because in Ireland we drink around 21 cups of coffee a week, with 15 of those consumed in work. 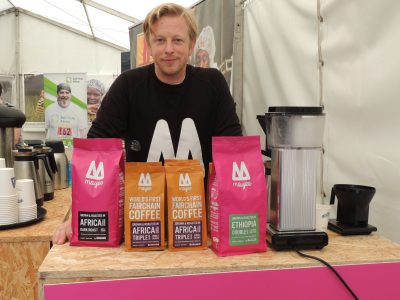 The coffee appeals to this audience because of its ethical pay structure – what Moyee refers to as “FairChain”.

The coffee also appeals because it is forest rather than field grown. This means that biodiversity in the forest is preserved. Moyee is selling coffee in Ireland and at the early stages of supplying in the UK and Europe. The company can visit any workplace or premises to arrange a tasting but also sells via the internet and its products are often purchased as gifts.

When CatholicIreland.net was on the stand at the Ploughing Championships, or “the Ploughing” as it is known, a visitor from the Gorilla Highlands Coffee company was present. Richard Rugaya, president of the company, told CatholicIreland.net that his company not only produces coffee with the aim of paying the farmers fairly, but also helps people and communities to grow and develop and to earn their living without cost to the environment.

This is particularly important in the Kisoro area, which is under the peaks of the Mufumbiro Mountains, home to the last silverback mountain gorillas. This area is located on the borders of Uganda, Rwanda and the Democratic Republic of Congo and is ideal for growing Arabica coffee.

He told CatholicIreland.net that there has been some improvement to the gorilla population in the area. It stood at 500 ten years ago and is now at 1000. He hopes to collaborate with Irish suppliers and people who can help promote the coffee and agricultural products from his area and promote tourism into the region.
See: www.moyeecoffee.ie and https://www.facebook.com/gorillahighlandscoffee/.