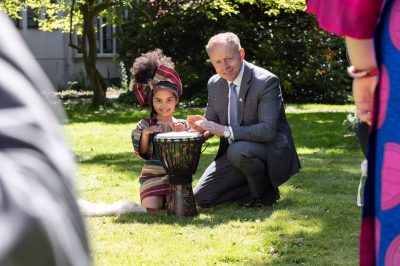 Africa Day is to go nationwide this year with ten local authorities holding events. The programme was launched at the Department of Foreign Affairs and Trade this week.

“Ireland recognises the potential in its relations with countries across Africa, which have been a core theme behind our Africa Day celebrations for over ten years. These relations continue to grow and strengthen in terms of political, economic and development cooperation,” said Ciarán Cannon, Minister of State for the Diaspora and International Development, at the launch. He added that Ireland is increasing its presence in Africa and is opening new embassies in Liberia and Morocco and expanding trade relations.

“We also recognise the strength and depth of cultures across our communities here in Ireland. By partnering with a record number of local authorities to celebrate Africa Day this year, we aim to harness the energy and cultural diversity that is now very much part of our society,” he said.

The ten local authorities are working with Irish Aid and collaborating with diaspora groups to offer diverse events that will run over the period leading up to Africa Day on 25 May and beyond into June.

“This year’s celebrations will focus in particular on community involvement and engagement,” said the Minister.

Highlights include:
– Fingal and South Dublin County Councils’ Family Fun Day on 1 June in Adamstown Community Centre and on 25 May in Lucan Centre African storytelling, art and photo displays
– a Culture of Africa’s event in the ARCH Community Centre in Athy, Co. Kildare on 17 May
– ‘Tastes and Sounds of Africa’ on the grounds of Ormston House, Limerick on 23 May
– Africa Day Cork, a family celebration in Fitzgerald’s Park, Cork on 25 May, preceded by African Nations Flag Procession
– Laois Africa Day 2019 event in the car park of Portlaoise Parish Centre on 1 June
– Africa Day Wexford will tie in with the Wexford Strawberry Festival in Enniscorthy on 1 June
– the 12th Annual Galway African Film Festival in NUIG, Galway, 1–2 June
– ‘Sounds of Africa’ festival in Waterford Cultural Quarter, Co. Waterford, on 6 June
– A family friendly ‘Taste of Africa’ event in Claremont Stadium, Navan, Co. Meath on 15 June.

Africa Day falls on 25 May annually and is the official day of the African Union, marking African unity. In Ireland Africa Day helps raise awareness of the official overseas aid programme managed by Irish Aid and of the United Nations Global Goals for Sustainable Development. It also increases public understanding of Africa by highlighting the diversity and potential of the continent and the potential for bilateral trade and investment linkages between Ireland and African countries.