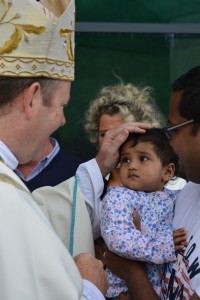 The head of the Italian Bishops Conference (CEI) has said the UN must address the tragedy of the hundreds of thousands of people making “voyages of death” to get to countries far from their own.

Cardinal Angelo Bagnasco made his comments after meeting 50 refugees in the Italian port city of Genoa on Monday.

He described the situation in the Mediterranean as “a real humanitarian tragedy” and questioned whether “these international organs, like the UN in particular, that gather political and financial power, have ever seriously addressed this human tragedy”.

“It is the West especially which through its European and international organs must seriously address and find effective solutions for this huge human tragedy, for these people who flee their countries because of war, violence and famine, seeking a better future”, the CEI president said.

Separately, the Primate of All Ireland has appealed to people not to exaggerate the level of immigration in order to “create fear” about immigrants.

Speaking in Knock on Saturday after delivering a keynote homily at the Co Mayo shrine’s nine-day novena, Archbishop Eamon Martin expressed concern to the Irish Independent over the use of words such as “swarms” in relation to immigrants, a term used by the British prime minister, David Cameron.

“We have to be careful that we are not exaggerating the numbers. In the last three years, how many young Irish people have left this country? Probably up to 40,000,” he suggested and underlined that the total number of immigrants coming here amounted to a few hundred people.

Dr Martin added, “We have to be careful of the fear factor that is sometimes generated on this issue and instead look at more creative ways of welcoming people into the country.”

He said the Government should be encouraged to keep playing its part in the Mediterranean through the Navy and he applauded the work of the naval vessels the LE Eithne and the LE Niamh.

“But increasingly we are also beginning to understand immigration. We have a lot of new communities who are actively growing up in Ireland and I think we have a lot to do and learn about how we can integrate our ‘New Irish’ more into community life, parish life and Church life.”

He admitted it is “a struggle for us in the Church”.

In his own diocese of Armagh, Dr Martin said many parishes had large numbers of new residents but the challenge was to get those new residents to feel a part of their parish and become members of church choirs and parish councils.

He welcomed the initiatives about student grants from migrants as discussed in recent days but warned, “We have to find more ways of integrating our new communities and harvesting, in a good sense, the contribution and the riches and diversity that they can make to this country because that is what other countries managed to do with the Irish who came to them.”

He suggested that last week’s visit of almost 200 US pilgrims to Ireland with Cardinal Timothy Dolan of New York had shown how Irish people had contributed to American life and society.

One group of young American nuns in Knock told him on Saturday, “We’re here because of what Irish Sisters did for us”.