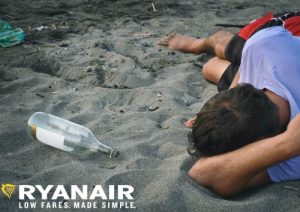 The controversial tweet shows a picture of a young man lying on a beach with an empty bottle beside him.  Accompanying the picture is the caption: “To all Leaving Cert and A-Level students: plan your dream summer holiday now so you have something to look forward to. Book on Ryanair.com in between ‘studying’ tonight. This could be you.” It was posted as 55,770 students began their Leaving Certificate exams nationwide.

In a tweet, the Portlaoise curate and well-known blogger Fr Paddy Byrne wrote that “Ryanair encouraging binge drinking as normal behaviour with controversial Leaving Cert advertisement needs to be challenged … Too often in parish life these holidays end in tragedy … young people of our island are so much more than this image.”

Speaking to CatholicIreland afterwards, Fr Byrne described the advertisement as scandalous. “As a priest in this parish I have over the past 17 years celebrated funeral masses for deaths that have occurred because of misadventure when people are on holidays. There are young lives that are never fully realised and it is all in the name of a bit of fun.”

He was saddened by the Ryanair tweet and insisted that in the same way that smoking ads were banned, so too there was no room for this type of advertising. “I’m a chaplain here at A&E in Portlaoise hospital and every weekend the number of people we get in as a result of drinking and binge drinking is growing dramatically,” he said. “The same is true for every A&E in the country where people are left on trolleys  because of people who take too much alcohol or recreational drugs.” 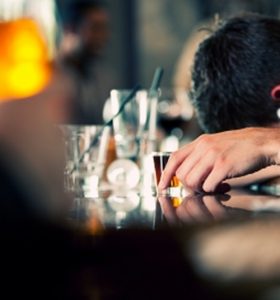 While we live in a culture that says it’s all about people’s own choices, he continued, people had to take responsibility for these choices. “In terms of advertising we cannot affirm culture that ends up [like this]. I’m wondering about that young man in that advertisement, lying on a sandy beach with a bottle. Is he dead? Where are his friends? Where are his parents? Is he going to be attacked or robbed or is this the type of escapism that we’re looking for in terms of society?  Is that what passes for recreation?”

Fr Byrne said that in the last year alone, he personally knew of three young people, one of whom was a man who had just completed his Leaving Certificate, who went abroad to celebrate and never came home alive. “We need to promote a culture where people are responsible,” he said.

He felt too that the advertisement was “demeaning” of young people, many of whom are cautious and who are “particularly keen on the notion of abstinence when it comes to driving”.

Rejecting widespread criticism of the tweet, a Ryanair spokesman said the “social media team were merely reminiscing about their own first lads’/girls’ trip away, and recalling all the wonderful sightseeing, sing-songs and cultural activities they enjoyed as teenagers.” The tweet was later taken down.