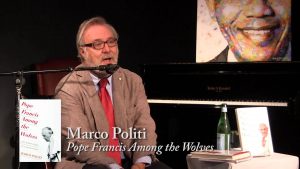 The Association of Catholics in Ireland is bringing the well-known Italian journalist and Vatican watcher, Marco Politi, to Ireland for two talks next month in which he will examine Pope Francis’ progress in bringing change to the Church.

Marco Politi is a journalist, commentator and a leading international expert on Vatican affairs for over forty years.

He is the author of ‘Pope Francis Among the Wolves: the inside story of a revolution’, as well as ‘Pope Wojtyla: The Farewell’; ‘The Return of God’; ‘I, Gay Priest’; ‘The Church That Says No’; and ‘Joseph Ratzinger: Crisis of a Papacy’. He co-wrote the best-selling book ‘His Holiness’ with Carl Bernstein.

In a statement, the Association of Catholics in Ireland (ACI) said Pope Francis “has captured hearts and given hope to millions of lay Catholics worldwide who see the need for reform and renewal in the Church”.

The ACI said the talks would provide an opportunity for people to hear about the opposition and difficulties experienced by Pope Francis from one of the world’s most accomplished Vatican observers.

Politi will speak at public meetings on Saturday 15 October at 4pm in the Chapel at Trinity College Dublin and on Monday 17 October at 7.45pm in Carlow College, Carlow.

After his talk there will be opportunity to dialogue with the author during a Question & Answer session.

The Association of Catholics in Ireland (ACI) is committed to the pursuit of a reform and renewal agenda in the Irish Catholic Church in the spirit of Vatican II.

It is committed to helping to re-build (through words and deeds) a united Church based on the teachings of Jesus Christ – a Church that is inclusive, compassionate, accepts the equality of all believers by virtue of their baptism and acknowledges its failures.