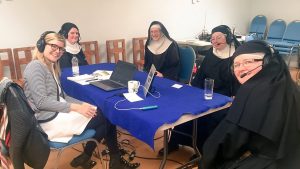 A live broadcast with Benedictine nuns commenting on everything from faith to men has won the 2018 Sandford St Martin Radio Award.

The good news was announced during a special ceremony held at Lambeth Palace, London.

BBC Radio 5 Live described the visit to the 21 nuns at Stanbrook Abbey in North Yorkshire as part of taking listeners “to new places”.

Presenter Emma Barnett interviewed nuns from the youngest Sister Marian to Mother Andrea about their lives before and after entering the monastery, and addressing topics like faith, family, community and commitment.

Listeners also had a chance to text in their questions which included everything from the spiritual to mundane concerns such as “is that habit itchy?” and “what is in your kitchen cupboards?”

The judges of Sandford St Martin Awards called the programme which took the Radio Award “an ambitious and superb example of live radio featuring all the intimacy and unpredictability this medium has to offer.” 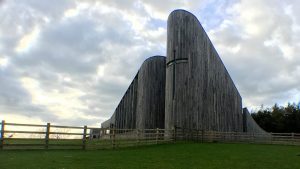 The daily production team for BBC 5 live posed the question “What is life like for a nun living in 21st century Britain?”

They highlighted how the monastery’s £7.5 million ultra-modern design symbolises prayers going to heaven.

They featured the monastery’s chocolate-making business and farm. They revealed how the nuns occasionally have a meal with monks and love premiership football, but concluded that some things never change as the nuns still pray six times a day.

Other 2018 Sandford St Martin Awards winners included the TV and Radio Times Readers’ Award for “Broken” by LA Productions Ltd for BBC One.

This TV drama was written by Jimmy McGovern who also wrote for Brookside.

It featured a Catholic priest who struggled to help parishioners with personal tragedies and problems and with community conflicts and people’s suspicions of the Church at large. This led him begin to question his own capabilities.

The 2018 Trustees’ Award went to Neil MacGregor who explored the history of human faith through objects in “Living With the Gods”, a 30-part BBC Radio 4 series and which was also the subject of a major exhibition at the British Museum.

Neil MacGregor has stated that religion is at the heart of human existence.

In “Living With the Gods” he traced how different societies have understood and articulated their place in the universe, and examined humankind’s belief systems and what happens when competing stories meet and sometimes clash.

The Interview of the Year Winner was “Heart and Soul: Good without God”, a BBC Radio Production North for BBC World Service.

Father-son team, Tony and Bart Campolo, were best known evangelical pastors in America. Tragedy struck when Bart had a bike accident. His faith disappeared – he still wanted to serve his community but not as a Christian.

In an interview with BBC reporter Jane Little they spoke of this new situation. The father prayed that his ‘prodigal’ son will return to God and the son believed that people can still be good without God.

The Children’s Award Winner was “Screwball!” by TrueTube/CTVC for TrueTube.co.uk. This comedy drama addressed some of the challenges facing young people in the early 21st century.

The TV runner-up prize winner was “ISIS: The Origins of Violence” by Blakeway Productions for Channel 4. It challenged the claim by ISIS that extreme violence is justified by the tenets and scriptures of Islam.

In the Radio Runner Up category was “Hardeep’s Sunday Lunch: Inverness” by BBC Radio 4.

Hardeep Singh Kohli was in his native Scotland to cook lunch for Inverness-based Colin Campbell and Rona Tynan who both suffer from multiple sclerosis. Rona was distressed to learn that Colin, who is more able than she, wanted to end his life.

The Children’s Runner Up winner was “My Life: New Boys in Town” by Drummer TV for CBBC about twelve-year-old Adel, a Syrian refugee who, with his best friend Elijah, helped welcome new refugees who are struggling to settle in his new home town of Bristol.

The Interview of the Year Runner Up was “Ramadan: In Conversation with Babar Ahmad” a CTVC for www.thingsunseen.co.uk.

Mark Dowd interviewed Babar Ahmad who spent eight years in UK prisons fighting extradition to the US on terrorism charges. He has since been released and returned to the UK.

The Sandford St Martin Trust promotes programming that deals with religion, ethics and spirituality. Its annual awards promote broadcasting about all faiths, from major networks, independents and online sources, at local and national level.

For links to programmes see: https://sandfordawards.org.uk/