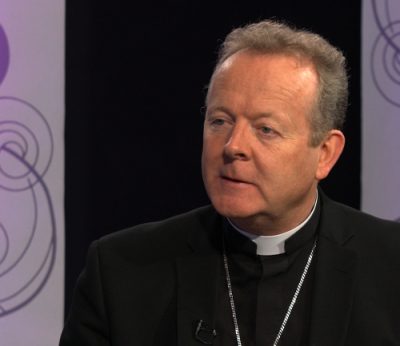 As representatives of the world’s bishops and religious superiors descend on the Vatican for a key summit on child sexual abuse, Archbishop Eamon Martin delivered a message of solidarity to survivors and victims of abuse.

Speaking ahead of his departure for Rome, the Primate of All Ireland apologised to victims stating, “I am truly sorry for what was done to you”. He admitted that they deserved to be believed, loved and cherished, “not isolated or seen as a threat”.

Archbishop Martin said that as he prepared to journey to Rome for the meeting with Pope Francis about safeguarding, he wanted to assure them that they were “uppermost in my thoughts”.

Referring to his meetings in recent weeks with abuse survivors, Archbishop Martin said they had told him about how they were hurt and violated, and about how their young lives “were turned into a nightmare by people who betrayed the sacred trust that you and your families had placed in them”.

As part of his preparations for the Vatican meeting, Archbishop Martin engaged in numerous face-to-face consultations and discussions with survivors of abuse across the four provinces of Ireland.

He has also received feedback in writing from survivors and from the lay faithful.

“I’ve learned also about how abuse devastated your confidence in yourself and others, your relationships, your family, and in some cases your spiritual, emotional, mental and physical well-being.

“Abuse broke your heart and spirit and sometimes you couldn’t tell anyone for years. And then – when all you wanted was to be believed and supported by the Church, and your abuser to be stopped from harming others – there were too many failures to listen, to understand, and to do what was right and just. I am truly sorry for these failures.”

He said it was no wonder many survivors and victims find it difficult to forgive. “You are still shocked by every new revelation which reopens your wounds and makes you feel the Church still hasn’t learned or fully understood.”

Some had asked him for prayers, and for the Church to openly express atonement and to say sorry.

“You rightly demand complete transparency and prompt cooperation with police and statutory authorities. You expect us to maintain robust efforts and standards for the protection of children, to continue to fully involve lay women and men in deciding and overseeing best practice, to independently audit our progress so that we never become complacent.

“You want our response to be child-centred and open to justice and accountability. You appreciate the counselling and support services offered by Towards Healing and others who have personally and pastorally reached out to you.”

Dr Martin described survivors as “precious members of the Body of Christ; you always have been and always will be”.

He acknowledged that nothing he said could undo the “terrible wrong you have endured”, but he committed himself to doing all he could to ensure that church activities are as safe as possible for children and vulnerable people.

“You will always remain in my thoughts and prayers,” he concluded.

On Sunday Pope Francis asked for prayers for the summit and described child sex abuse as an “urgent challenge of our time”.

He has summoned the presidents of bishops’ conferences from around the world to Rome in a bid to chart a way forward and agree best safeguarding practice for an institution with over 1.2 billion adherents.

Meanwhile, Archbishop Diarmuid Martin of Dublin has said the Church has to stand with victims.

Speaking to CatholicIreland.net in Gardiner Street church after he celebrated Mass for Blessed John Sullivan SJ, Dr Martin said, “Victims carry this with them and they will carry it with them tomorrow and next year. We have to be with the victims.”

He also underlined that the experience of meeting with victims could be “quite harrowing” as they revealed what they have undergone.

“They can be very angry people and rightly so and there is no way you can smooth out or say we have now resolved that problem.”

Referring to the perpetual candle for survivors in the Pro Cathedral which Pope Francis silently prayed at in August, Archbishop Martin said that the candle “was imposed on us by a victim. I use the word imposed because he himself wanted it to be there and I was happy to accept it. This was an idea that came from … [victims] and I think that has maybe been forgotten in initiatives today. It has been there very quietly; it is the fruit of the suffering of somebody who has been abused.”

On the Church’s lack of a universal definition of what constitutes child sexual abuse and the inconsistency in applying safeguarding norms in the Church in different countries, the Archbishop commented, “this is a problem and could even be a problem in Ireland; we have norms, but they could be interpreted in different ways.”

He said the Church must try to find not just definitions but a measure to ensure that procedures are carried out uniformly with the same interpretation.