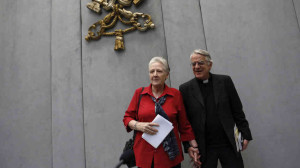 Two Irish survivors of clerical abuse will be among a group of six meeting Pope Francis today in the Vatican.

The meeting will be the first time the Pontiff has met victims officially since his election in March 2013.

The six survivors are drawn from Ireland, Britain and Germany and they will meet the Pope after Mass at his residence in Domus Santa Marta.

Each of the six will be given an opportunity to give Pope Francis a first-hand account of their suffering.

The three groups of two from each country will each be accompanied by a member of the Pope’s Commission on the protection of minors.

The Irish survivors will be escorted by Marie Collins who was abused by a priest at the age of 13 when she was sick in hospital.

In May, the Pope called the sexual abuse of children by priests a crime comparable to a “satanic Mass” and promised “zero tolerance.”

In an interview with the Associated Press, Marie Collins stated her top priority was for the Vatican to punish those bishops who have covered up for priests who raped children.