A decision of the Supreme Court of Israel may today (29th January 2014) decide the fate of a group of sisters in a convent in the Cremisan Valley of the West Bank in Palestine.

Following a seven-year legal campaign, it was decided that the huge West Bank barrier would be built around the convent near the Christian town of Beit Jala, leaving the convent on the Palestinian side of the barrier and the monastery and land belonging to the convent and local families on the Israeli side.

The nuns are represented by the Society of St Yves, a Catholic human rights organisation. Last Friday, the community of Beit Jala conducted its final mass at Cremisan to pray the wall would not be built. The mass was attended by ambassadors and diplomats representing dozens of countries (including the European Union, Ireland, France, Italy, Brazil, Spain, Chile, Slovenia, Portugal, Sweden, Malta and the United Kingdom among others). The community had conducted the weekly mass as their tool of nonviolent resistance for more than two years.

“We have a just cause, it is about our land, it is about our presence, it is about our dignity, about our faith and about our future. But the world remains passive to Israeli actions. That’s why we decided to ask the one who always listens, God, to strengthen our work for a just peace that will grant the future our community deserves in our free country,” said the celebrant of the Mass, Fr. Ibrahim Shomali.

A group of Catholic bishops of the Holy Land Co-Ordination, including bishops William Crean of Clyne and Denis Nulty of Kildare, have appealed to the public to pray, and have called for justice to be upheld in the Cremisan Valley.

The bishops met with many families from Beit Jala during a recent visit to the Holy Land and heard of their pain and anguish. “They are faced with the threatened loss of their land and livelihood as the planned security wall will destroy vineyards, groves and orchards and separate them from their land,” the twelve bishops wrote. 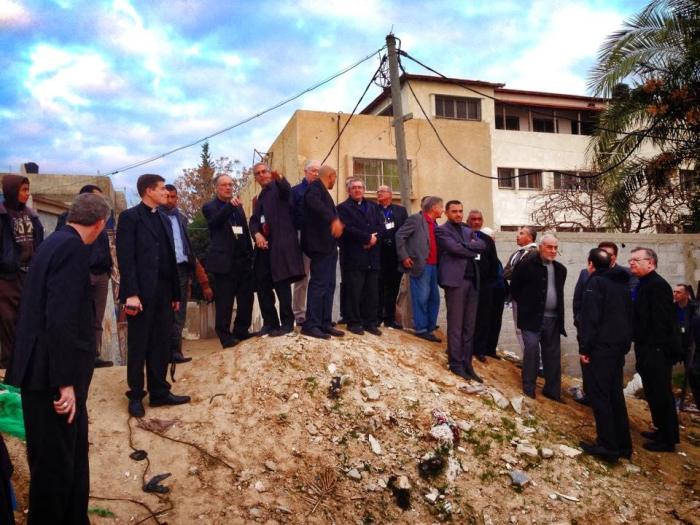 Bishop representatives of the Episcopal Conferences of various parts of the world at the Gaza Strip, January 2014

“However, the planned route of the security wall deviates sharply from the Green Line, the internationally-recognised demarcation line separating Israel and the territories captured in the six-day war of 1967.”

They went on: “More than three quarters of the wall’s planned route falls outside the Green Line and is illegal according to a landmark advisory opinion of the International Court of Justice, while also a flagrant breach of the Geneva Convention and the Universal Declaration of Human Rights.”

The bishops, representing Ireland, England, Wales, the US, France, Germany, Scandinavia, Poland, South Africa and Canada have called on their own governments to encourage Israel to abide by international law.

In a statement they said their deep concern was that the planned security was “more about consolidating the settlement areas and permanently choking off Bethlehem from Jerusalem. This particular plan is a microcosm of the tragic situation in the Holy Land which incites resentment and mistrust, making the possibility of a much-needed solution less likely.”