Home > Featured > A thank you from Turkana

A thank you from Turkana 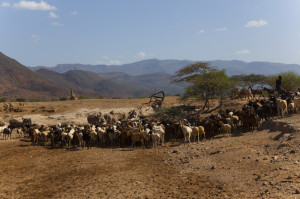 Livestock in Turkana in northwest Kenya, a semi-desert region.

Irish support for a Missionary Community of St Paul the Apostle and Mary, Mother of the Church, in northern Kenya is helping to ensure that more than 1,500 children and 400 mothers receive a regular food supply.

Turkana in the northwest of Kenya is a semi-desert region stretching over an area of 77,000 km2 in the Great Rift Valley. The people of the area have traditionally been nomadic pastoralists, moving their herds from place to place in search of fresh grazing and water. Traditionally, they have lived on a diet of milk, blood and meat from their herds of sheep, goats, donkeys, cows and camels, supplemented with any wild fruit that they may gather.

Because drought is a frequent occurrence in Turkana, they live a precarious existence, but the Missionary Community of St Paul the Apostle and Mary, Mother of the Church, (MCSPA) has been helping improve their lot by drilling boreholes, digging shallow wells and building catchment dams to trap surface run-off water when it does rain.

“The level of isolation and of poverty that the people of Turkana face affects the whole population, but especially the most vulnerable – women, children and elders,” says one of the missionaries, Fr Denis Odongo, a Kenyan priest who has been living in the Turkana region for 15 years and who was ordained as an MCSPA priest five years ago. “I joined the Missionary Community of St Paul in December 2001, because I felt called to be part of a project that entailed working in the remotest part of our country among a people that had very little knowledge of the Good News.

The Church of Our Lady Queen of Peace in Todonyang, Turkana

“There is an ignorance of agriculture for providing alternative foods to eat and an ignorance of basic disease prevention. In the villages the level of sanitation and hygiene is often very poor because of a lack of education about hygiene matters, a lack of clean running water, a lack of latrines, and endemic poverty.”

Fr Odongo is involved in a Nutritional Rehabilitation Centres programme that started in 2007, originally with seven centres catering for around 490 children. With the help of the Irish charity Aidlink and the Irish government agency Irish Aid, this has expanded to 15 centres that feed more than 1,500 children.

“The centres have moved from only being nutritional units to being Mother and Child Centres, where both are cared for,” said Fr Odongo, who has visited Ireland on three occasions. “The main objective is to provide the children with a meal a day, and two meals where possible. They also offer basic early childhood education and provide monthly medical checkups. The women also receive training in agriculture and trade.

“My plans are to transform the Mother and Child Centres to centres that require very little assistance from abroad.  Some of the centres may even become primary schools in the future. The faithful in Ireland can help me achieve this dream by supporting the payment of qualified teachers at these centres. We have catechists who double up as teachers/caretakers, but very few of them are fully qualified teachers.”