(St Patrick’s Day:We are offering these resources from our Saints of the days series as material for homilies this year as in Ireland  we celebrate St Patrick, our Patron Saint. )

(Second Sunday of Lent Below St Patrick resources you will find the resources for Sunday , Lent 2. 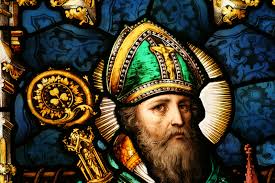 The irony about St Patrick is that, though for long he has been touted as a symbol of Irish nationalism and opposition to Britain, he probably was himself a Brit, possibly from the Carlisle district of north-west England. Here Patrick Duffy outlines his life. 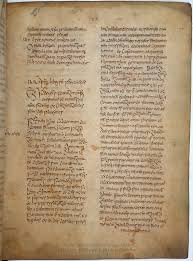 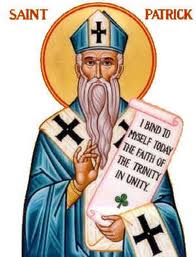 This Gospel reflection is available with our thanks to Reflections on the Weekday Readings 2021-2022: My Words Will Not Pass Away by Martin Hogan and published by Messenger Publications  c/f www.messenger.ie/bookshop

Some time ago I climbed Croagh Patrick for the first time in the company of my sister, Catherine, and brother-in-law, Patrick, who died a few years ago on the feast of Saint Joseph. They both lived in Southern California. Patrick, who was from the United States, was determined to climb Croagh Patrick. He was recovering from cancer at the time, and, in spite of a very bad back, he wanted to make this climb in thanksgiving for having come through his surgery and treatment so well, and also as a prayer of petition for God’s ongoing help. We managed to get to the top, just about. The Croagh Patrick climb is one expression of the cult of Saint Patrick that has continued down to our time. We venerate Patrick today because he spent himself in proclaiming the Gospel on this island, bringing Christ to huge numbers of people.

It is evident from his two writings that have come down to us that Patrick came from a reasonably privileged background. His father was a town counsellor who had a comfortable house with many servants. Patrick says that he was born free, of noble rank. Suddenly, his personal and communal landscape changed radically. At the age of sixteen, he was taken captive with others and brought to Ireland. As he says, he found himself among strangers. Gone were his comfortable home, his loving family, his freedom. He was now a slave, with no rights or protection. He was lost, without friend or future. It is hard to imagine the impact of such a traumatic experience on one so young. Yet, as he wrote his Confession in his old age, he recognised the great gifts that came to him during this painful and lonely time of exile. Although his grandfather was a priest, and Patrick had been baptised, he acknowledged that as an adolescent he ‘did not know the true God’. He said he had turned away from God. However, in exile, while herding sheep in all kinds of weathers he had the most extraordinary spiritual awakening. Looking back, he spoke of the ‘great benefits and graces the Lord saw fit to confer on me in my captivity’. He spoke of the Lord’s ‘wonderful gifts, gifts for the present and for eternity, which the human mind cannot measure’. He went on to say, ‘my faith increased and the spirit was stirred up so that in the course of a single day I could say as many as a hundred prayers, and almost as many in the night’.

Many years later, he finally broke free of his captivity and made his way home to his family. Having been profoundly touched by God in the years since he left his family, he was now sensitive to the presence and the call of God in his life. Some years after returning home, he heard the Lord’s call to return to the land of his former captivity to preach the Gospel. He trained for the priesthood and arrived back in Ireland, this time as a free man, or, perhaps more accurately, as the Lord’s slave or servant. He spoke of himself now as a ‘stranger and exile for the love of God’. He wrote of ‘the people to whom the love of God brought me’. His mission in Ireland was fraught with dangers and difficulties of all sorts, including at times opposition from leading members of the Church in Britain who had authorised his mission to Ireland. Yet his two writings are full of a strong sense of God’s protective and guiding presence in his life. He was very aware of all the Lord was doing through him, in spite of setbacks. He wrote, ‘I am very much in debt to God, who gave me so much grace that through me people should be born again in God and afterwards confirmed.’ He asked, ‘What return can I make to God for all his goodness to me? What can I say or what can I promise to my Lord since any ability I have comes from him?’ Writing towards the end of his life, Patrick could see the many ways the Lord had worked powerfully through his painful experience of exile as an adolescent. Because of that traumatic experience of loss, the Gospel was brought to what Patrick called ‘the most remote districts beyond which nobody lives and where nobody had ever come to baptise, to ordain clergy or to confirm the people’.

Patrick’s life teaches us to be attentive to the ways that the Lord may be surprisingly present in situations of great struggle that seem devoid of any value at the time. Whereas it is never the Lord’s desire that misfortune should befall us, when it does come our way he is always there with us, working among us and within us for our good and the good of others. Perhaps our very vulnerability at such times can make us more attentive to what the Lord may want to say to us. Patrick’s experience of exile made him alert to the Lord’s call at different moments of his life. Our own experiences of exile and loss, whatever form they may take, can help to make us more alert to the Lord’s loving purpose for our lives. Our own personal circumstances may prompt us to place a distance between ourselves and the Lord, just as Peter in the gospel reading asked Jesus to leave him. However, the Lord can turn all the circumstances of our lives, including our failures, to a greater good, if we entrust ourselves to him as Peter did, and as Patrick did.