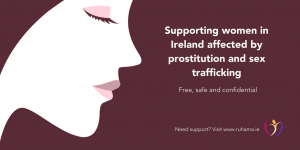 Releasing its annual report for 2016, the NGO revealed it supported 304 women from 37 different nationalities during 2016, including 92 victims of sex trafficking from four continents.

Some of these women experienced rape, assault and many other forms of psychological, physical and sexual violence.

Intensive support from Ruhama’s casework service was required by 222 women. Most had been sexually exploited in brothels, massage parlours, hotel rooms and apartments across the country.

A further 63 women in street prostitution accessed support via Ruhama’s mobile outreach van, which takes to the streets of Dublin’s ‘red-light’ areas 3 to 4 times a week.

“The bulk of prostitution in Ireland is run by organised crime gangs who profit from the sexual exploitation of women and girls, particularly in off-street locations. These unscrupulous individuals make money from human misery – moving often vulnerable migrant women in a coordinated fashion from brothel to brothel across Ireland, with a view to satisfying local sex buyers’ demands,” Sarah Benson, CEO of Ruhama, said.

She added that since March of this year, important new laws have been in place in Ireland to protect those harmed in prostitution, as part of the Sexual Offences Act 2017.

“It is now illegal to purchase sex in this country and the penalties for organising and profiting from prostitution have been increased. More needs to be done to ensure that these laws are properly enforced, in order to achieve their objective to minimise the inherent harm of a wholly exploitative trade,” she said.

The Sexual Offences Act 2017 also decriminalises those selling sex outdoors, something Ruhama has long campaigned for.

“It was already permissible for individuals to sell sex indoors and so now there is a recognition enshrined in law that no one should be criminalised for their own exploitation in Ireland. It is incumbent on Gardaí to ensure that they do not target vulnerable people in prostitution for criminal sanction.

“The vast majority of those in prostitution are women, and there are also a small number of transwomen and men. All may be victims of many different crimes, including human trafficking. Garda focus should be targeted towards the buyers and those who are genuinely profiting from the prostitution of others.”

Ruhama has called on the government to fully resource the Garda National Protective Services Bureau and regional bureaus so that they can take down the organised crime networks that control prostitution and sex trafficking in Ireland.

Ruhama has also called on the government to mount a public awareness campaign to ensure that people know that “this is now a country where no human being can be considered for sale”.

Chairman of Ruhama, Colm O’Dwyer, states in the annual report, “There is undoubtedly a continuing and growing need for Ruhama’s services.”

While prostitution has largely moved off the streets into anonymous apartments, massage parlours and suburban housing estates, he warned that “it seems to have become quite pervasive in Ireland over the past few years. Unfortunately, ‘off-street’ prostitution is easier for criminal gangs to control and well suited to the exploitation of vulnerable women through trafficking. Out of sight is out of mind and the women are often, literally, trapped. Ruhama, we hope, provides some realistic chance of escape.”

He reiterated Ruhama’s view that prostitution and trafficking are inextricably linked.

Women (and girls) are frequently brought to Ireland into brothels under false pretences, by blackmail and by coercion. A woman in a brothel may have had her ID documents and passport taken and may be moved on a regular basis. She may not have English or any immigration status. Contrary to popular belief, she could also be Irish or a citizen of an EU Member State.

The repeal of the offence of soliciting for prostitution coupled with the criminalisation of the purchase of sex (the buyer), brings Ireland’s prostitution laws in line with the ‘Nordic model’, recognising the human rights violations experienced by the majority of women who end up involved in prostitution.

Colm O’Dwyer stressed that “So-called ‘sex work’ is rarely a free choice, but rather a result of circumstances such as poverty, trafficking or drug addiction.”

Ruhama’s outreach van took to the streets of Dublin’s ‘red light’ areas on 130 nights in 2016, reaching out to a total of 63 women involved in street prostitution. The van is a safe space where women can access very practical supports such as hot drinks, snacks, hats and gloves and health and safety supplies, alongside much-needed emotional support and onward referrals to their own and other specialist services.

The women in street prostitution, according to Ruhama, were often leading complex and sometimes chaotic lives. They were typically facing a range of vulnerabilities and challenges including poor physical and mental health, domestic violence, substance use issues, poverty and debt, and homelessness or the risk of it.

They also had to cope with serious dangers whilst selling sex on the street – many women reported being threatened, robbed, and physically or sexually assaulted.

The women accessing casework in 2016 most commonly originated from:

“Like me, some of us end up homeless, if we left the brothel we live in, or the pimp ‘boyfriend’ or we simply lost our homes when we stop making the rent. Prostitution, if it is anything, is a choice between homelessness and having men we don’t like do things we hate,” said Rae Story, prostitution survivor and activist.