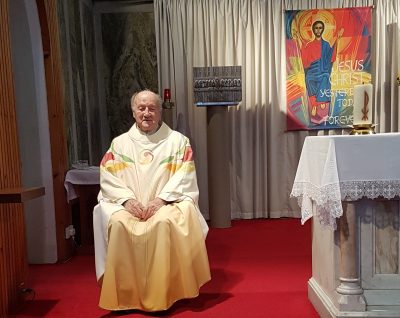 This weekend a special Eucharistic celebration is planned for the Diocese of Clogher’s longest-serving priest, who was ordained 65 years ago in Rome.

Mass will be held on Saturday 1 June at 11.30 a.m. at St Patrick’s Church, Ballybay, Co. Monaghan to mark the 65th anniversary of the ordination to the priesthood of Monsignor Gerard McSorley. It takes place a couple of days after the priest’s 90th birthday.

Monsignor McSorley will be the chief celebrant at the Mass and he will be joined by other priests from Clogher diocese as well as visiting priests.

Bishop Larry Duffy of Clogher will preside in the sanctuary, while members of Monsignor McSorley’s family and members of the local community will take part in the liturgy.

Monsignor McSorley was ordained on 13 May 1954 in Rome, where he had completed his studies.

He was born in Eskra, Co. Tyrone on 29 May 1929 and was educated at Newtownsaville National School, Omagh CBS and St Macartan’s College, Monaghan, before he embarked on his studies at the Pontifical Irish College in Rome.

Following ordination, he continued to work in Rome for a further year before he was appointed to Tempo in 1955 and then Errigal Truagh in 1956.

In August 1957 he was appointed to the staff of St Macartan’s College where he served until 1971, when he was transferred to the parish of Monaghan and Rackwallace.

In 1980 he was appointed as Prior of Lough Derg and Administrator of the Parish of Pettigo. For the next ten years he oversaw the renewal of the Lough Derg pilgrimage and a major redevelopment of the pilgrimage shrine, including the building of new accommodation and dining areas, together with the refurbishment and renewal of St Patrick’s Basilica.

In 1990 he was appointed parish priest of Tullycorbet, a post he held until September 2004. He has continued to serve in the parish as Pastor-Emeritus.

A former player with Tyrone Minor teams in the 1940s, the priest still retains a keen interest in GAA and other sports, especially soccer and golf.

The Diocese of Clogher encompasses all of Co. Monaghan, most of Fermanagh and portions of Tyrone, Donegal, Louth and Cavan. It has a Catholic population of 88,000, across 37 parishes, which are served by 57 priests and 2 deacons. There are 85 churches in the diocese.