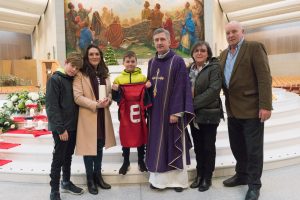 The family of Anthony Foley – his wife Olive and her sons Tony (11) and Dan (8) and Anthony’s parents Brendan and Sheila with Fr Richard Gibbons after the last Mass of the #8masses4no8 campaign at Knock Shrine. Photo: Keith Heneghan/Phocus.

The last Mass of the #8masses4no8 campaign saw crowds of up to 2,500 from the four provinces of Ireland travel to Knock shrine on Sunday.

Olive Foley, wife of the late Anthony Foley, said the response to the campaign initiated by her 11-year-old son Tony following the passing of the Munster and Irish rugby legend in October had been an “unforgettable experience of solidarity”.

She said the engagement around the campaign has reflected the kindness of people.

The final Mass in the campaign, which was initiated by Tony just the day after his father’s burial, was celebrated by Knock parish priest, Fr Richard Gibbons.

Anthony Foley, the head coach of Munster, passed away suddenly in October, hours before his side were to play Racing 92 in the Champions Cup in Paris.

He had won 62 caps for Ireland, captaining the team on three occasions. He also won 201 caps for Munster and led Munster to the European title in 2006.

He retired from playing at the end of the 2007/08 season and joined the Munster backroom staff in July 2008 as technical advisor and assistant coach for defence.

Foley held the position of head coach with both the Munster U20s and Munster’s British & Irish Cup squad that reached the inaugural B&I Cup final in May 2010.

He moved to the position of Munster Rugby forwards coach at the start of the 2011/12 season and gained experience at national level as the forwards and head coach for the Ireland Wolfhounds, as well as forwards coach for Ireland. He started the role of head coach in July 2014.

Foley’s father Brendan also played for Ireland, as did his sister Rosie.

The Munster and Ireland great was recently inducted into the RTÉ/Sport Ireland Hall of Fame at the RTÉ Sport Awards.

Olive Foley, her sons, Tony and Dan, Anthony’s father and mother, Brendan and Sheila, his sister and others travelled from Killaloe and were joined by hundreds more from Co Clare.

Speaking afterwards, Olive said that the campaign generally and especially the final Mass in Knock was an experience that will carry them through the tough days ahead.

“We’ve had and will continue to have for a long, long time very difficult moments and days. But today was a good day for us and this campaign generally has been amazing.”

“Tony came up with the idea and we all supported it on the grounds that it was so others could have their loved ones remembered alongside Anthony. We got such incredible support following what happened to Anthony that we just wanted others to come under that roof and feel the warmth.”

“We had people contacting us from all over the world and today at Knock was no different. I must have met everyone in the basilica after Mass and many travelled for hours. Each and every one of them had a story to tell about a person close to them who also passed away.” 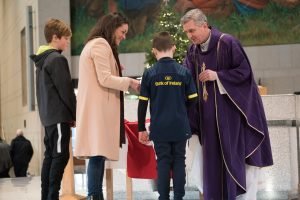 The family of Anthony Foley, his wife Olive and her sons Tony and Dan, present a Munster rugby jersey to Fr Richard Gibbons at Knock Shrine. Photo: Keith Heneghan/Phocus.

“We were just so privileged to have so many others join us in this journey and we will never, ever forget that. We offered today’s Mass for all those who died and whose family or friends wanted remembered by this campaign.”

The family presented a No 8 jersey at the start of Mass on Sunday and placed it on a table in front of the altar.

A candle was then lit and placed on the table in memory of all who have died and been remembered in the campaign.

Olive and her sons also presented the gifts during the Mass.

In his homily, Fr Richard Gibbons said that while he never met or knew Anthony Foley, he was struck from what he has heard by his likeness in character to St Joseph.

“St Joseph uttered no words whatsoever in scripture but from what I have heard of Anthony, he was, publically at least, a man who preferred to let his actions do the talking but when he did talk, people listened. He was, also like Joseph, a great family man and we welcome the Foley family with love and support here today to Knock.

“They have been remarkable in their grief. They have been so selfless in inviting others to remember their loved ones with Anthony in this campaign and it has helped so many. I’ve read some of the comments and what’s struck me is just how appreciative people were of this.

“Many people have gone back to Mass for the first time in a long time as a result of this campaign and really appreciated and liked being back. It shows yet again that there is a great need for spirituality and the door is always open.

“The Mass has always been very sacred to Irish people and this campaign shows that it is still so today. It shows that it can have a deep and enriching experience and not least at a time of need.”

Commenting on the Mass, Olive Foley said it was “incredible. There was such a sense of peace and compassion and Fr Richard’s homily was amazing. It was so kind of him to invite us up today and to dedicate this Mass to the campaign. What we saw here again today reminded us of just how important our faith is and how it is carrying us through a very difficult time.”