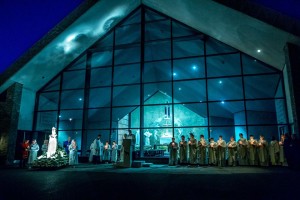 Archbishop Michael Neary of Tuam has described the presence and work of the Knock Shrine handmaids and stewards as “in keeping with the message of the apparition”.

In his homily on Friday to mark the 80th anniversary of the two lay groups, the Archbishop said their presence echoed the apparition which was “a silent but very sensitive, effective and eloquent presence”.

In their service they stood shoulder to shoulder with and ministered to the invalids and pilgrims.

Speaking as the son of a Knock Shrine steward and handmaid, Dr Neary said he was “very conscious of the dedication which they bring to their work”.

“On behalf of all pilgrims and on my own behalf I congratulate all stewards and handmaids for the sterling service which they provide at Mary’s Shrine,” he declared at Knock Basilica on Friday evening.

Giving thanks for 80 years of dedicated service, the Archbishop said that pilgrims to Knock have been “edified by the self-effacing, generous and welcoming manner in which the Stewards and Handmaids go about their work”.

Pilgrims, he said, come day after day, year after year to worship and adore the Lord and to ask the help of his Mother.

“They endeavour to cope with everything that life throws at them, whether it is ageing, illness, so many family difficulties, upset, trouble or worry about the future and the kind of society which our young face. Pilgrims come in search of healing and hope.”

The main reason for its establishment was to promote the Shrine of Knock at home and abroad so that it could take its rightful place with other important Marian Shrines across the world.

The Knock Shrine Society wanted to ensure that pilgrimages would be dignified and that facilities would be provided for the protection and care of the invalids who were coming in large numbers.

The Society was a voluntary one consisting of both men and women. Male members were referred to as Stewards and female members as Handmaids. Membership was open to all.

Membership of the Society continued to grow and when Saint John Paul II visited Knock in 1979 there were 1,200 members.

The great inspiration and driving force was Dame Judy Coyne who was also hugely significant in the great developments at Knock for over 70 years until her death in 2002.

John Paul II paid tribute to the handmaids and stewards in Knock Basilica, indicating that he knew from first-hand experience the value of the service which they rendered to ensure that pilgrims would feel welcome and at home at the Shrine.

“The stewards’ role is to welcome pilgrims to the Shrine by guiding and assisting them during ceremonies and processions. The handmaids take special care of the sick and invalids and respond to their needs,” Dr Neary said.

He also highlighted that the stewards and handmaids owe a huge debt of gratitude to Tom Neary, the chief Steward.

“His constant presence, clarity of vision and gentle leadership ensure that Knock Shrine Society remains faithful to its ideals in serving all pilgrims in a warm, welcoming and joyful manner,” he commented.