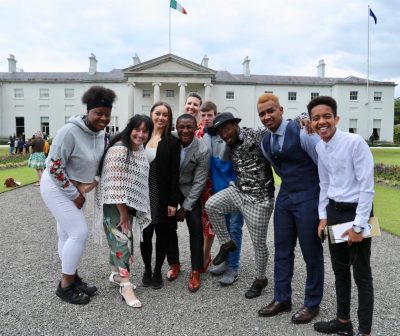 Speaking at his garden party to acknowledge organisations and volunteers working with refugees and asylum seekers in Ireland, he said this figure highlights “the growing scale of the challenge we face in helping refugees, asylum seekers and those internally displaced”.

Speaking at the garden party at Áras an Uachtaráin on Wednesday 19 June 2019 he said: “Some of you here today came to Ireland seeking refuge from war, natural disasters or persecution, turning to your fellow global citizens for protection and shelter, with the hope for a better future and increased opportunities for yourselves and your families.”

The President was referring to the newly published Global Trends report, which stated that 70.8 million children, women and men had been forcibly displaced by the close of 2018. This is the highest number in the UN refugee agency’s almost 70 years of operations. It is 2.3 million more than the previous year and twice as many as 20 years ago.

“The increased global figure gives further confirmation of a longer-term rising trend in the number of people around the world needing safety from war, conflict and persecution,” said Filippo Grandi, UN High Commissioner for Refugees.

He added that while debate about refugees and migrants can often be divisive, it is not all bleak. For example, there has been generosity and solidarity shown by many, especially by communities who are hosting large numbers of refugees.

He explained that there is “unprecedented engagement” by new groups and bodies such as those involved in development, and by private businesses and individuals.

The figures in the report may not fully reflect the total number of displaced persons. The crisis in Venezuela is only partly recorded in the figures. Four million Venezuelans have left their country, which means this is one of the world’s largest current displacement crises, but only around half a million have taken the step of formally applying for asylum.

About 80 per cent of refugees live in countries neighbouring their place of origin. Almost two-thirds of those uprooted from their homes are internally displaced people who have not left their homelands.

An estimated 13.6 million people became newly displaced during the year because of wars or persecution. The total included 10.8 million IDPs and 2.8 million new refugees and asylum seekers. The growth in displacement continued to outpace the rate at which solutions are being found for people who become displaced. With refugees, the best solution is being able to return home voluntarily, in safety and dignity, the report states.

It gives the example of Syrian refugees who hope to return from camps in neighbouring Jordan and elsewhere, but the conflict continues in places and there is very little work, medicines and food in Syria.