Archbishop Michael Neary has paid tribute to as many as 545 young John Paul II Award winners for their “very significant contribution” to the Archdiocese of Tuam.

At Our Lady’s Basilica in Knock last Thursday, the Archbishop presented the awards to the successful young people watched by 1,200 family, friends, teachers, principals, chaplains, priests, and representatives of the various parish and diocesan bodies.

Siobhán Bradley, Diocesan Coordinator of the John Paul II Awards, congratulated the Award recipients saying, “You are a source of great hope and an inspiration.”

Speaking to those receiving their Award, Archbishop Neary said, “During the year I have been made aware of the very significant contribution which you yourselves have been making in so many ways throughout the length and breadth of the Archdiocese of Tuam. 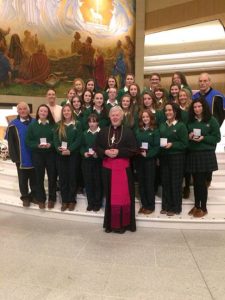 “I have witnessed the way in which you, in your Transition Year projects, have presented various aspects of your local Church and the great pride that you take in your local Church. Your visitation of nursing homes brought great joy and hope to residents through your good humour, your music and song.

“At Mass and in the Sacraments many of you have been reading as ministers of the Word, involved in church choirs; others have accompanied young people as they were preparing for Confirmation in the ‘You Shall Be My Witnesses’ programme; you have been role models for younger people who look to you for direction.”

All 545 Award recipients, aged between 16 and 18 years, received their medal and certificate in recognition of their work in schools, parishes and communities during the past year.

They were involved in everything from publishing a parish prayerbook to teaching computers to the elderly, setting up a youth choir in their parish to caring for people with special needs on pilgrimages to Lourdes.

The Master of Ceremonies for the occasion was 17-year-old Gold Medal recipient, Darragh Kennedy, from St Colman’s College, Claremorris. 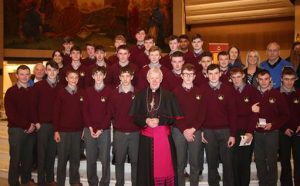 He also offered congratulations on behalf of everyone gathered for the event to Archbishop Neary on the occasion of his silver jubilee as a bishop.

Two Award recipients, one from Rice College, Westport and another from St Jarlath’s College, Tuam, presented Archbishop Neary with a specially commissioned half and half Galway and Mayo jersey, bearing the number 25, in recognition his years of episcopal service, and the hashtag #ourfavbishop.

It is aimed at enabling young people to become more aware of the teaching and role of the Catholic Church in the world and to engage them at a deep level with Christ.

The Award was created to commemorate the late Pope John Paul II. It was launched by the then Papal Nuncio to Ireland, Archbishop Giuseppe Lazzarotto, on 7 November 2006 in the Diocese of Derry.

Awards are earned by taking part in parish and social activities for 1 hour per week over 8, 14 or 20 weeks.

There are three Awards – Gold, Silver and Bronze. Those that have completed the Gold Award have a further option of completing the Papal Cross Award. 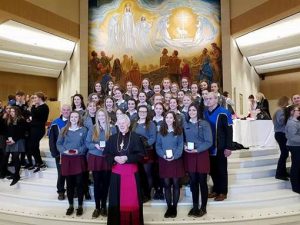 Recently, 181 people from 12 dioceses from across Ireland took part in a special pilgrimage to Rome to celebrate 10 years of the Pope John Paul II Awards.

From Sunday 29 October to Friday 3 November 2017, the group took part in daily Mass, activities, talks, liturgical celebrations and tours while experiencing the wonderful city and culture of Rome.

In keeping with the award principles, during the pilgrimage, ten pilgrims were given the opportunity to volunteer with the Comunità di Sant’Egidio night soup kitchen service.

One group went to the Tuscolana Station area; the other went to the Vatican City. You can read about their experience here: Pope John Paul II Awards/Rome.