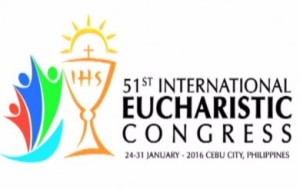 The 51st International Eucharistic Congress gets under way today in the Philippine city of ‎Cebu.

The theme for the Congress is ‘Christ in you, our hope of glory’ which is taken from the letter of St Paul to the Colossians.

The Congress will open with a Eucharistic celebration held at the Plaza Independencia in Cebu City.

The choice of the Asian nation was announced by Pope Emeritus Benedict XVI during a video message at the conclusion of the previous International Eucharistic Congress in Dublin in June 2012.

The organiser of that event was Bishop Kevin Doran of Elphin, who is in the Philippines with a group of 26 pilgrims from Ireland.

The Eucharistic Congress runs from 24 to 31 January.

Some 15,000 people from about 90 countries, and at least 1 million Filipinos, are expected to ‎participate in the event. ‎

A Eucharistic Congress gathers together the clergy, religious and laity to ‎promote the ‎awareness ‎of ‎the ‎central place of the Eucharist in the life and mission of the Catholic ‎Church.

A Eucharistic Congress includes Masses, adoration of the Blessed ‎Sacrament, prayers, devotional ceremonies, catechesis, exhibitions and other events, and are also ‎organized at national, regional and diocesan levels. ‎

Some 16 international speakers are expected to address participants during the 8 days of the IEC in ‎Cebu, with translations in English, Portuguese, Chinese, Japanese, Vietnamese, Korean, French, and ‎Italian.

Masses, prayers and liturgical celebrations will be held in seven languages. Besides a ‎Eucharistic procession, adoration and benediction, the congress will also feature events such as ‎workshops, films, concerts and stage plays, with organizers providing video streaming online. ‎

The first International Eucharistic Congress was held in Lille, France, on 21 June 1881.

Since then, Asia has ‎hosted the international event four times.

The first International Eucharistic Congress in Asia was hosted by the Philippine capital Manila, in February 1937.

Bombay, or Mumbai today, became the ‎second Asian city to host it in November 1964. It also became the occasion for the first ever ‎visit by a pontiff – Blessed Pope Paul VI – to India.