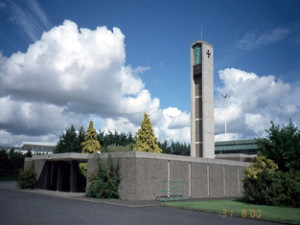 Church of Our Lady, Queen of Heaven, Dublin Airport

Archbishop Diarmuid Martin of Dublin has questioned how a faith, in which love and mercy are so central, often ended up with Church institutions which were harsh and judgemental.

Speaking on Sunday at Dublin Airport, the Archbishop asked, “How did we so often create a judgemental and harsh God in the place of the God revealed in Jesus Christ, one who came to show mercy and healing, renewal and liberation?”

He suggested that the faithful all too often make gods of their own.

“We turn the God of tenderness and compassion into a God who sets out abstract rules which are applied with the harshness of our idea of justice. God is not like that,” he stated.

Elsewhere in his homily at a Mass to celebrate the 50th anniversary of the opening of Our Lady Queen of Heaven at Dublin Airport, he recalled that as a young seminarian he had assisted Archbishop John Charles McQuaid at that opening Mass.

“We have to ask ourselves as a Christian community how we can today increasingly become a community of care and solidarity, even in the anonymity of the world of a busy airport.”

“We look especially to our young people and challenge them to be more directly involved in community building,” he urged.

In his homily, he suggested that the creation of beauty can be a true expression of faith in God and a sharing in God’s creative design.

“Creation is the fruit of and the expression of God’s love and must be maintained in its integrity in a spirit of love and not just be used or exploited or simply to be neglected just as pleases us.”

He said Christians who believe in a God of love are called to be in the forefront in their communities in fostering relationships of care and solidarity and especially in rejecting the climate of violence which all too often in recent times has mired our city, as yesterday [Saturday] when a six year old child was shot.”

The Primate of Ireland said the Church must be a symbol of how community can be built in the midst of a busy and often fragmented world: “community where God’s love is lived out.”