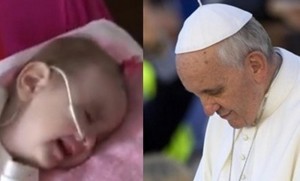 At the conclusion of his audience yesterday, Pope Francis asked for a minute’s silence and then together with the crowd, he recited a Hail Mary for the child’s health.

He had met Noemi, who suffers with spina bifida, and her parents, earlier in the day.

“Now, I would now like to ask you for an act of charity,” said the Holy Father to the tens of thousands of faithful gathered in sunshine at St Peter’s Square.  With a smile he added “It’s not a collection!”

He went on, “Before coming to the Square, I went to see a seriously ill child aged just one and a half. Her mother and father pray and implore the Lord to cure their daughter. She is called Noemi and she smiled, poor girl.”

“Let us carry out an act of love; we do not know her but she is a baptised child, she is one of us, a Christian. Let us ask the Lord to help her in this moment and to give her health: first in silence, and then let us pray the Hail Mary.”

Silence fell over the square for a moment, after which the Pope said, “And now let us pray together to the Virgin for the health of Noemi. Thank you for this act of charity,” he concluded, after all the pilgrims recited the Hail Mary together.

The Pope met Noemi and her parents where he lives at Santa Marta. According to Andrea Sciarretti, Noemi’s father, the Pope telephoned the family on 15 October and they had a lovely chat.

After introducing himself and explaining he had received his letter, the Pope asked Andrea, “What can I do for you?”  Noemi’s father said Pope Francis was very easy to talk too.  He was Noemi’s great friend. Afterwards the Pope sent them a present of rosary beads.

“It was an indescribable feeling, a mixture of feelings – one was of being with a great man of the Lord, to then thinking of our ill daughter.” The twenty-six year old father from Guardiagrele said he and his wife are fighting to obtain a type of medical treatment for their baby.

Earlier at the audience, Pope Francis continued his catechesis on the Creed, speaking of the need for a “communion of spiritual goods”. The Pope named three ‘spiritual goods’ – the sacraments, charisms and charity.

“The sacraments offer us the impetus to become missionaries, and the apostolic commitment to taking the faith to all places, even the most hostile, is the most authentic fruit of a steadfast sacramental life, inasmuch as it constitutes participation in God’s salvific plan, which aims at bringing salvation to all,” he said.

Charisms help to build up the Church in unity, holiness and service. They are not given for the benefit of the recipient, but “for use by the people of God”. They are “particular graces, given to some for the good of many others,” he said.

Charity is the third aspect of this communion of spiritual goods. “The charisms are important in the life of the Christian community, but they are always a means of growing in charity, which St Paul places above the charisms,” Pope Francis said.

“Without love even the most extraordinary gifts are in vain whilst the smallest of our gestures of love brings good to all.”

The charity of which he spoke, was not the “easy charity that we offer between ourselves” but something deeper, the pontiff said. “It is a communion that makes us able to enter into the joy and the pain of others in order to sincerely make them our own.”

Often we are too dry, indifferent and detached, and instead of transmitting fraternity, we transmit ill-humour, coldness and selfishness, he said, but only “love that comes from the Holy Spirit” will make the Church grow.