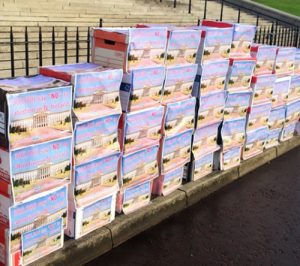 Some of 57 boxes containing 300K signatures presented to NI Assembly.

What is believed to be the largest ever petition to the Northern Ireland Assembly was delivered earlier this week.

The 300,000 petitions oppose changes to Northern Ireland’s abortion law and come in response to 45,000 signatures from Amnesty International presented to the Assembly in late October.

The Amnesty petition called for abortion to be available “in cases of rape, incest or severe and fatal foetal impairment.”

“Today I am presenting you with what I believe to be the largest petition ever received by the Northern Ireland Assembly – 300,000 signatures calling for the protection of unborn children in Northern Ireland,” Mr Wells told Mr Newton. “These have been signed by Northern Ireland residents who have given their address and can be verified, so therefore I believe that this petition is indeed authentic.”

The South Down MLA said that eight million unborn children had been aborted in the rest of the United Kingdom since the introduction of the current 1967 Act. “I am absolutely convinced the people of Northern Ireland do not want that law to extend to this part of the United Kingdom,” he added. 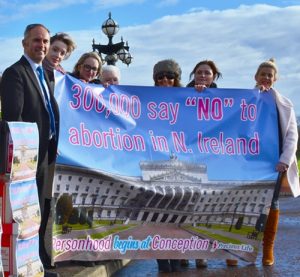 The two opposing petitions were handed to the Assembly as the Stormont Executive considered recommendations of an expert panel tasked with examining the ban in respect of cases involving a diagnosis of so-called ‘fatal foetal abnormality’.

The UK’s Abortion Act (1967) does not apply to Northern Ireland and abortion is permitted only where there is a probable serious and long-term risk to the mental or physical health of the mother.

Although the conclusions of the working group have not been published, leaked reports to the BBC say the group has recommended legislative change for babies with life-limiting conditions.

The pro-life petition was sponsored by Precious Life. Bernadette Smyth, the director of the group, said that Amnesty’s 45,000-strong petition “should not be taken seriously as anyone could sign it online providing only a name and email address.”

Meanwhile, a project launched in Dublin, Galway and Cork on Wednesday 30 November is highlighting all that is “positive about the Eighth Amendment”. The LoveBoth Project advocates putting in place more practical supports for families facing unplanned or difficult pregnancies. Among its participants are women like Mary Kenny who have been through an unexpected pregnancy. 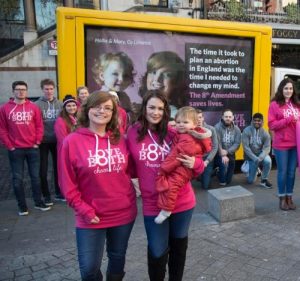 “If I had listened to the pro-choice line when I discovered I was pregnant, I wouldn’t have my beautiful three-year-old daughter, Hollie. And those pushing for repeal of the Eighth Amendment would have no words to console me for the loss I’d have suffered,” she said at the Dublin launch on Wednesday. “I am so grateful that the Eighth Amendment was there when I faced a crisis pregnancy. I dread to think what might have happened if there had been an abortion clinic just down the road from where I live.”

Spokesperson for the LoveBoth Project, Sinead Slattery, said that in countries where abortion is legal, the pressure grows on women to have terminations. “What is presented as ‘choice’ is often experienced by women as pressure. You only have to look at the fact that in England today 9 out of every 10 babies with Down Syndrome are aborted.”