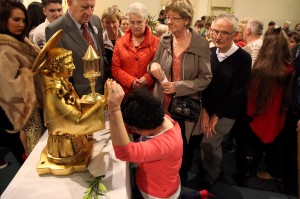 A total of 250,000 people turned out at 17 venues across Ireland and the UK to venerate the relics of St Anthony between 17 October and 3 November.

The tour will finish up today in London when the relics will travel to Pentonville prison before returning home to Padua.

There was standing room only at the service celebrated by Archbishop Vincent Nichols of Westminster diocese on Saturday evening.

The Archbishop described St Anthony as a great carer of the poor, who is often depicted with the child Jesus. “May we too hold Jesus in front of us” he said.

For three hours before the Mass, thousands of people of all ages filed past and venerated the relics, after queuing outside the cathedral.

On the previous evening the relics were brought into Southwark Cathedral more than an hour before the All Saints Day Mass but already most seats had been taken.

Shortly afterwards several appeals had to be made for a growing crowd to be patient and move back from the altar. The cathedral remained open late to allow visitors to venerate the relics and leave prayer requests to be placed at the saint’s tomb in Padua’s basilica.

Yesterday, the final official venue of the tour was St Peter’s Italian Church in London’s Clerkenwell, where veneration continued late into the evening.

Huge crowds and queues turned up at the churches and cathedrals in Glasgow, Aberdeen, Newcastle, Manchester, Liverpool, and Chester, and before that in Ireland at Dublin, Wexford, Cork, Limerick and Galway.

Fr Mario Conte, OFM Conv, who is a Franciscan Greyfriar, said he was delighted by the huge numbers of people who gathered to venerate the relics and who had felt Anthony to be a presence in their lives.

“Anthony was an extraordinary preacher. He was made a saint only 11 months after his death, the shortest time in the history of the church. Instead of people having to go to Padua to venerate the relics of St Anthony, he has come to them.”

The editor of the International Edition of the Messenger of St Anthony magazine, who is based in Padua, was present the last time St Anthony’s tomb was opened in 1981 and he described feeling a special connection ever since with the popular saint, whom he described as “truly a messenger of God”.

In his view, “there is nothing superstitious about relics; the real meaning of a relic is love – they are a link of love between the person who venerates and the saint”.

Around four million people visit St Anthony’s tomb at Padua every year. St Anthony is the patron of many things, including lost people or items; the elderly; and the oppressed and poor.

The two relics – a small piece of petrified flesh and a layer of skin from the saint’s cheek – have been on a tour to mark the 750th anniversary of the discovery of St Anthony’s incorrupt tongue in 1263, which was 32 years after his death in 1231.