Home > News > Irish dioceses participate in ’24 hours for the Lord’

Irish dioceses participate in ’24 hours for the Lord’ 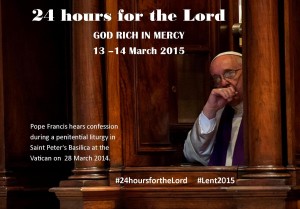 Irish dioceses will be taking part in the ‘24 hours for the Lord’ initiative today and tomorrow which encourages catholics to avail of the sacrament of confession during Lent.

The initiative was received with great enthusiasm when it was introduced in 2014.

The theme guiding this year’s reflection is ‘God rich in mercy’ (Eph 2:4).

Special opportunities will be available in dioceses for prayer and confession and in Rome Pope Francis himself will be participating in the initiative and will preside at a penitential service in St Peter’s Basilica in order to place the Sacrament of Reconciliation at the centre of the Church’s mission of the new evangelisation.

In his address to participants in a Vatican course for confessors on Thursday, the Pope said, “Without doubt, among the sacraments, it is that of Reconciliation that best shows the merciful face of God.”

The sacraments, the Pope said, are ‘the concrete way God created to move closer to us, to embrace us, without shame for our limits.”

He said confession should be a way of bringing the penitent to a greater realisation of God’s mercy. That mercy, he added, assumes “the just commitment to make amends.”

For priests, too, confession should be a learning experience, the Pope continued.

He remarked that confessors, as witnesses to the repentance of others, can be led to examine their own consciences more carefully.

“Every faithful penitent who approaches the confessional is ‘sacred ground’ to be cultivated with dedication, care and pastoral attention,” the Pope said.

He stressed that priests, in hearing confessions, should always bear in mind that they are ministers “purely by the grace of God,” and it is God’s mercy that they invoke.

Follow what’s happening in Irish dioceses on Twitter by using the #24hoursfortheLord hashtag and by following @CatholicBishops.

Cardinal Seán Brady, Archbishop Emeritus of Armagh, will celebrate Mass on the Friday evening and the 24 hours will conclude with the Saturday evening Mass being celebrated by Archbishop Eamon Martin, Archbishop of Armagh and Primate of All Ireland.

There will be opportunities for the Sacrament of Reconciliation during the 24 hours and in keeping with the theme for the time of prayer, people are encouraged to make a special effort in the season of Lent, to celebrate the love and mercy of God. The full schedule for the 24 hours event in Armagh Archdiocese follows:

Saturday 14 March: Reflections and Prayers at 6am. Morning Prayer at 9am. Midday Prayer 12 noon. Way of the Cross at 3pm. Evening Prayer at 5pm. Sunday Vigil Mass at 7pm.

– In the Diocese of Cloyne five churches will remain open to offer the Sacrament of Reconciliation for 24 hours from 5pm on Friday 13 March to 5pm on Saturday 14 March. The churches involved are:

– The Diocese of Derry is inviting people to gather in prayer in the presence of the Blessed Sacrament in Saint Mary’s Oratory, Buncrana, beginning at 5.30pm on Friday 13 March and concluding at 5.30pm on Saturday 14 March. The Sacrament of Reconciliation will be available on Friday 13 March from 8.00pm – 11.00pm and on Saturday 14 March from 11.00am until 5.00pm. For more information contact Buncrana Parish on 074 9361253 or visit www.buncranaparish.com.

– Elsewhere, in the Diocese of Elphin 24 hours for the Lord initiative will be observed in Sligo, Roscommon Town and Athlone. In the Cathedral of the Immaculate Conception, Sligo, a Holy Hour on the theme of reconciliation will be held on Friday 13 March from 6pm-7pm. Following this Holy Hour, adoration of the Blessed Sacrament will continue in the Adoration Chapel until Saturday 14 March concluding with vigil Mass at 7.30pm in the Cathedral. The theme which will guide this prayer vigil is: ‘God rich in mercy’ (Eph 2:4).

In the Church of Our Lady of Lourdes, Caltra, there will be Mass on Friday 13 March at 7pm, followed by Stations of the Cross at 7.30 pm, leading to all-night Adoration, ending with Mass on Saturday evening. There will be an opportunity for those present to avail of the Sacrament of Reconciliation on Friday from 8 to 9pm, and on Saturday from 11am to 12pm and from 6 to 7pm.

In Athlone, Co Westmeath, the Disciples of the Divine Master welcome you to join them in the Chapel of Adoration for a guided prayer vigil from 9pm to 10 pm on Friday 13 March.

– In the Diocese of Kerry, the Tralee Pastoral Area will celebrate 24 Hours For The Lord in Saint John’s Church on Friday 13 March from 6.45pm until the Saturday evening vigil Mass at 6.10pm. Saint John’s Church will be open for Eucharistic Adoration and the Sacrament of Reconciliation throughout these 24 hours. The parish invites you to drop in and spend some time with the Lord.

– In the Diocese of Limerick the 24 hours for the Lord initiative will take place in Saint Augustine’s Church, O’Connell Street, Limerick. It will begin on Friday 13 March after the 4pm Mass and will conclude on Saturday 14 March after Mass for the Sick which begins at 3pm. In between the various liturgies there will be Eucharistic Adoration with priests available for the Sacrament of Reconciliation. All are welcome.

Some of Pope Francis’ memorable quotes about why Catholics should go to Confession: