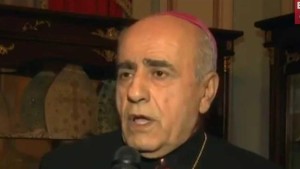 A Syrian Catholic Archbishop has revealed that is city is now surrounded on all sides by ISIS/Daish militia.

He expressed concern for the fact of 232 Assyrian hostages, among whom there are 51 children and 84 women.

Initial contacts and efforts to secure their release have so far been unsuccessful.

Archbishop Jacques Behnan Hindo, head of Archieparchy in Hassaké-Nisibi told Fides, “We are going through a terrible time. The jihadists of the Islamic State attacked Hassaké for two days. They were warded off by the army and Kurdish militias. But we are cut off, like an island surrounded by jihadists from all sides.”

Archbishop Hindo, who is head of Archieparchy in Hassaké-Nisibi, described the dramatic conditions lived by the population of the largest city in the northeastern Syrian province of Jazira.

“Last night we heard that the army bombed the city of al-Shaddadi, stronghold of Daesh 60 kilometres from Hassaké. We are told that the muezzin from the mosques asked people to go and donate blood to save the lives of many wounded.”

“And according to the information we have, it is almost certain that also 232 Assyrian Christians that jihadists took hostage when they attacked the villages in the valley of the river Khabour are still held in al-Shaddadi.”

“We have not had any news regarding the fate of 232 Assyrian hostages – among whom there are 51 children and 84 women – and initial contacts in an effort to secure their release have so far been unsuccessful.

Speaking in a radio interview from Australia, Metropolitan Assyrian Mar Mellis Zaia said that ISIS jihadists have asked for $23 million to free the Christian prisoners.

Due to the impossibility of collecting such a huge amount of money, negotiations had stopped ceased.

Archbishop Hindo said the ransom request was “absurd” but he also said he was unsure about the reliability of channels used so far in the negotiations.

He told Fides that ISIS/Daish negotiators usually know what is a realistic figure to ask for and would not have asked for such a huge sum.

The Archbishop said he hoped new negotiations would be started soon in an effort to free the Christian hostages.