Home > Featured > 2020 marks the start of a “decade of delivery”, hopes Trócaire CEO

2020 marks the start of a “decade of delivery”, hopes Trócaire CEO

Next year should mark the start of a “decade of delivery” for the UN Sustainable Development Goals, says Trócaire’s chief executive, Caoimhe de Barra, in an end-of-year review published on the Catholic aid agency’s website.

The 17 development goals (listed below) aim to end poverty, protect the planet and ensure that all people enjoy peace and prosperity.

“Meeting these global goals requires a collective effort,” says de Barra. “We can all play our part to support a movement that puts the furthest behind first.”

Ireland’s “sluggish reaction” to the alarming warnings of scientists about the devastating effects of climate change has been frustrating, says de Barra, especially as Trócaire workers are already witnessing the astonishing impact of climate change in other parts of the world. 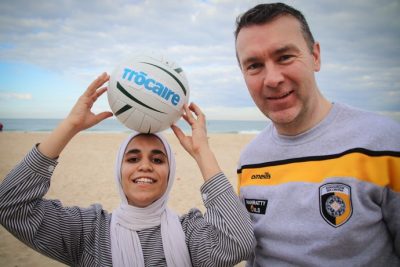 “We in Ireland are the third highest emitters of carbon in the EU and towards the bottom of the table for positive action,” she said. “The Climate Emergency Measures Bill – which would end fossil fuel exploration – was blocked by the government with their use of a technical measure called a ‘money message’ to block the bill, despite the fact that a majority of TDs have twice voted in support of it.”

Nevertheless, de Barra is heartened by growing numbers of people taking their own personal actions for the environment and for sustainability.

“It has been an inspiring year of activism on the streets, with young people and adults alike staging school strikes, protests and actions,” she says. “This year feels like a watershed moment for awareness on climate change, and I was delighted to march on the streets in September with other Trócaire colleagues and thousands of school strikers.”

In her review of 2019, de Barra also noted: the passing in April of former Trócaire worker Sally O’Neill, who served with the agency for 37 years; the continued vulnerability of human rights defenders in many parts of the world; the US backing given to Israel’s illegal settlements and apartheid regime; and the plight of migrants fleeing conflict or the impact of climate change.

There are a lot of problems in the world but they can be solved, the Catholic aid agency’s CEO said. “In the spirit of hope, I would like to remember that 25 years ago Trócaire began working in Rwanda, a country that was torn apart. But today, people in Rwanda are looking to a brighter future. This Christmas, we must all remember that hate and division benefit no one.”

The UN Sustainability Development Goals are: