200th anniversary of the ordination of St John Vianney 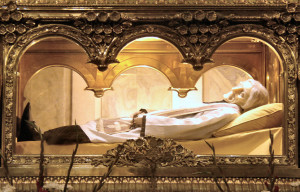 Archbishop Diarmuid Martin of Dublin will preside at the opening Mass of a novena to honour the feast of St John Vianney and the bicentenary of his ordination.

St John Vianney parish in Artane is celebrating the special anniversary of the patron saint of priests between 4-13 August.

The Archbishop will be chief celebrant at the opening Mass at 10am on 4 August, the Saint’s feast day. The 200th anniversary of the Curé d’Ars’ ordination falls on 13 August.

The novena will incorporate daily Mass at 10am with veneration of relics, a holy hour and confession.

The parish of St Vianney in Ardlea has also produced a special prayer card and this prayer will be said each day after Mass for the duration of the novena.

St John Vianney was a French parish priest who spiritually transformed the community in Ars and its surroundings.

He was renowned in his own lifetime for his saintly life, mortification, his persevering ministry in the sacrament of confession, and his ardent devotion to the Blessed Virgin Mary and to St Philomena.

To honour the 150th anniversary of his death, Pope Benedict XVI declared a year for priests, running from the feast of the Sacred Heart 2009 until 2010.

Pope Benedict XVI also proclaimed St John Vianney the Universal Patron of Priests and “a true example of a pastor at the service of Christ’s flock”. The Year of the Priest was intended to encourage priests to strive for spiritual perfection.

PRAYER TO ST JOHN VIANNEY
St John Vianney, model of priestly life, pray for all ministers of the Church.

St John Vianney, tireless in your service of sinners in the confessional, pray for all who cannot bring themselves to confess their sins.

PRAYER OF ST JOHN VIANNEY
I love you, O my God, and my only desire is to love you until the last breath of my life.

I love you, O my infinitely loveable God, and I would rather die loving you than live without loving you.

I love you, Lord, and the only grace I ask is to love you eternally…..

My God, if my tongue cannot say in every moment that I love you, I want my heart to repeat it to you as often as I draw breath.