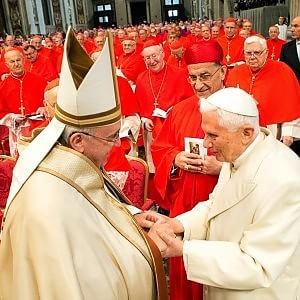 Pope Francis had strong words for the twenty new members of the College of Cardinals elevated at the Ordinary Public Consistory on Saturday.

In St Peter’s Basilica, the Pontiff told the new cardinals that they must avoid being jealous or boastful, and they should not be puffed up with pride.

The cardinalate was “not a kind of accessory, a decoration, like an honorary title. Rather, it is a pivot, a point of support and movement essential for the life of the community,” he said.

Pope Francis announced the date of their canonisations as 17 May 2015.

Pope Emeritus Benedict XVI attended the consistory service. Pope Francis asked his predecessor to attend as he did last year for the previous consistory on 22 February 2014, which created 19 new cardinals.

The retired Pope makes public appearances only when he is invited by the Pontiff.

Addressing the membership of the College of Cardinals gathered for the occasion, Pope Francis spoke of the nature of ecclesial service.

The cardinalate is an honour, but it is not honorific, he said.

“This we already know from its name – cardinal – from the word ‘cardo’, a hinge. As such it is not a kind of accessory, a decoration, like an honorary title. Rather, it is a pivot, a point of support and movement essential for the life of the community,” he underlined.

“You are ‘hinges’ and are ‘incardinated’ in the Church of Rome, which “presides over the entire assembly of charity,” he said.

Referring to the “hymn to charity” in St Paul’s First letter to the Corinthians, the Pontiff said this was the guiding theme for the celebration and for the cardinals’ ministry, “especially for those of you who today enter the College of Cardinals”.

In the reading, St Paul explains that charity “is not jealous or boastful, it is not puffed up with pride”.

“This is surely a miracle of love, since we humans – all of us, at every stage of our lives – are inclined to jealousy and pride, since our nature is wounded by sin,” Pope Francis acknowledged.

“Nor are Church dignitaries immune from this temptation,” he warned.

St Paul also highlighted that charity “is not arrogant or rude, it does not insist on its own way”.

These two characteristics show that those who abide in charity are not self-centred. The self-centred inevitably become disrespectful; very often they do not even notice this, since ‘respect’ is precisely the ability to acknowledge others, to acknowledge their dignity, their condition, their needs, the Pope said.

The self-centred person inevitably seeks his own interests; he thinks this is normal, even necessary.

He warned that those “interests” can even be cloaked in noble appearances, but underlying them all is always “self-interest”.

Discussing the nature of charity, the Pope said it makes people draw back from the centre in order to set themselves in the real centre, which is Christ alone.

Then, and only then, can we be persons who are respectful and attentive to the good of others, he explained.

Charity, St Paul says, “is not irritable, it is not resentful”.

“No. This is unacceptable in a man of the Church. Even if a momentary outburst is forgivable, this is not the case with rancour. God save us from that!”