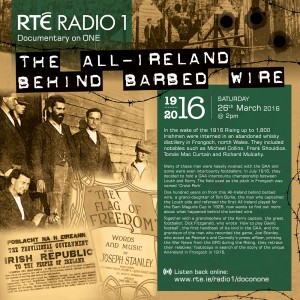 The parish priest of Fossa in the diocese of Kerry is one of three contributors to a radio documentary aired by RTE Radio today on the internment of 1,800 Irishmen at the Frongoch camp in Wales in the wakes of the 1916 Rising.

In the documentary ‘The All Ireland Behind Barbed Wire’, Fr Tom Looney, along with the newseditor of CatholicIreland.net, Sarah Mac Donald and Meath businessman Kevin Stanley retrace the journey their relatives took in 1916 after they were shipped to Britain without trial.

Focusing on a unique game of GAA football which took place between Kerry and Louth in Frongoch in July 1916, Fr Looney, Sarah Mac Donald and Kevin Stanley rediscover the roles played by their granduncle and grandfathers respectively.

Sarah Mac Donald is granddaughter of Tom Burke, the man who captained the Louth side and later refereed the first All Ireland played for the Sam Maguire Cup in 1928.

Fr Tom Looney is a grandnephew-in-law of the Kerry captain, the great footballer, Dick Fitzgerald, who later wrote ‘How to play Gaelic football’, the first handbook of its kind in the GAA.

Kevin Stanley is the grandson of the man who recorded the game, Joe Stanley, who acted as Pearse’s and Connolly’s press officer, printing the War News from the GPO during the Rising.

Their family members were imprisoned in Frongoch along with approximately 1,800 Irish prisoners, including notables such as Michael Collins, Frank Shouldice, Tomás Mac Curtain and Richard Mulcahy.

Today (Saturday 26 March) at 2pm RTE Radio 1 airs the documentary ‘The All Ireland Behind Barbed Wire’ as part of their ‘Documentary On One – 1916 Season’.

Fr Looney’s knowledge of Dick Fitzgerald, the husband of his grandaunt Kitty Dillon, is extensive and was put to good use in the book he penned called  ‘King in a Kingdom of Kings’, and republished Dick’s own handbook.

“He was the first Gaelic football superstar probably in Ireland, certainly in Kerry,” Fr Tom Looney who is a priest in the Kerry parish of Fossa, told CatholicIreland.net.

Dick Fitzgerald and his colleagues were not only GAA players but among those who raised funds and built many of the pitches and playing fields which remain to this day. They were also very much involved in the events that led to 1916 and among the Volunteers.

Fr Looney put a context for the GAA in 1916 and told CatholicIreland.net, “The GAA was very much part and parcel of the story of freedom and liberation, the right to organise our own games.”

He said that when Michael Cusack started the GAA Irish people had no rights to organise sport of any kind.

“The GAA took control of the right to organise our pastimes and our games,” he explained.

“It wasn’t the sport of kings any more, it was the sport of the ordinary folk and that was the great revolution – our right and our freedom to play the Irish game like hurling, football and camogie. At that time sport would only be organised by the local landlord, so this was a major social upheaval,” he said. 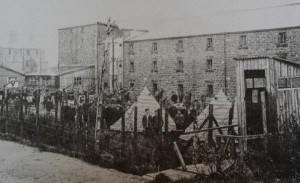 After the 1916 Easter Rising, these young men were captured and shipped across the Irish Sea on cattle boats.

They spent months in Frongoch, which later became known as Ollscoil Na Réabhlóide or the ‘University of Revolution’ as the internees were radicalised, and learned how guerrilla tactics to ensure the mistakes of the Rising were not repeated.

Sport played an important part in their life there – keeping them fit, focused and keeping their spirits up while also forging close bonds of friendship.

The field used as the football pitch in Frongoch was named ‘Croke Park’ after the stadium in Dublin on Jones’ Road which the GAA had only just purchased for £2,400 in 1913 using record gate money generated by the Croke Memorial Tournament between Louth and Kerry that year.

Posters advertising the Wolfe Tone Tournament final match in Frongoch between old rivals Kerry and Louth informed fans that ‘admission was 5 shillings and wives and sweethearts should be left at home’!

To hear the documentary: Saturday 26 March at 2pm RTE Radio 1
To listen back online see: http://www.rte.ie/radio1/doconone/